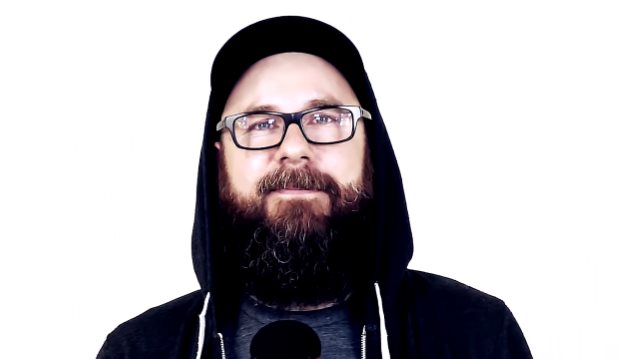 Spark TV, which is part of the Czech monthly magazine Spark, recently conducted an interview with IN FLAMES frontman Anders Fridén. You can watch the full chat below. A few excerpts follow (transcribed by BLABBERMOUTH.NET).

On the difference between the band's forthcoming "Battles" album and 2014's "Siren Charms":

Anders: "I'd say the main difference is that it's recorded in the sun, in California, instead of the winter in Berlin. That's a big difference. I really believe the environment… it gets to you, somehow. That's really what we were after when we went to Berlin, but now we wanted something else. Yes, I felt different. I felt different in the end. In Berlin, I put myself in a position where I thought that would give me a creative outlet or that's what I wanted to do. Now, I put myself in a different situation. Also, me and Björn [Gelotte, guitar] worked way closer than we've done in the past. The music was done in one corner, the vocals in one corner and we met in the mix. Now, because we worked with Howard Benson, he produced the album, he wanted demos. We haven't really done proper demos before; now we had to create demos for all the songs because he wanted to know what we wanted to say and feel. Basically, what do you want to say with the songs? We had to write proper demos. That meant we were already happy in our little world before we started recording. There were no surprises with the final results. In the past, I'd lay down the vocals and the other guys would hear it and I'd hope they like it. Most of the times, they did, but sometimes, it would take them some time. Now, we were all on the same level. It's a different approach this time. "

On the continual changes to IN FLAMES' sound:

Anders: "Of course if you listen to [1994's] 'Lunar Strain' and jump directly into 'Battles', they sound different. They do. But I believe if you listen to 'Battles' and 'Siren Charms' and go back through our 12 albums, you'll find something significant for being IN FLAMES. Like I said, we won't write as much in between [albums]. We're not constantly writing; things definitely happen. We don't want to do the same thing again and again."

On if he pays attention to "haters":

Anders: "I hear it. People like you bring it up in interviews. I don't search for it, no. But I'm fully aware of it. As soon you sign a record deal and put your album out, then you're open for grabs. People can say and are entitled to say what they want. It doesn't really affect me. At the end of the day, I'm happy with the results. And the ones that are angry, mad, and dislike it, I can't go home to them and say, 'You should like me because I put so much energy…' There's no point. I can't do anything about it. I don't write music for first and foremost for anybody else but me."

On the suggested use of child vocals on the song "The Truth":

Anders: "Some people think it's kids, but they are 25-year-old girls and two boys as well who have a high pitch. For 'The Truth', where they are sort of portraying... the song is how kids are the most honest we have until they get programmed by society. We wanted them to portray that. Obviously, they sound like kids, but they're not. It's almost like PINK FLOYD on 'The Wall' where the kids are going up against the establishment. This is more like where I question, 'How can we on one hand come up all these things to destroy and kill each other, and at the same time look at our kids and say 'Better stay in school, eat your breakfast, brush your hair, and be nice to your neighbor.' On the other hand, we are like, 'I want to kill him!' They are that voice. It really worked really well so we can use them for other songs where it gives my vocals a different dimension."

"Battles" will be released on November 11 via Nuclear Blast in all territories excluding North America and Scandinavia and Eleven Seven Music Group in the U.S.