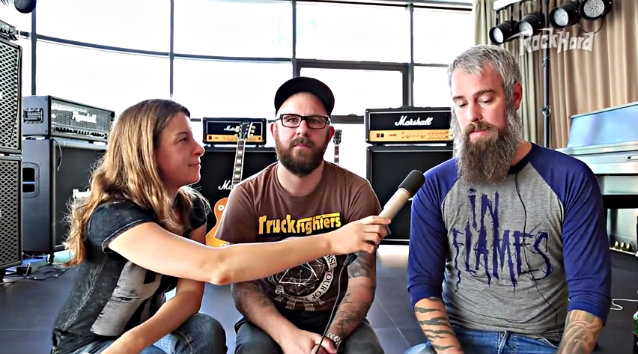 Germany's Rock Hard magazine recently conducted an interview with vocalist Anders Fridén and guitarist Björn Gelotte of Swedish metallers IN FLAMES. You can now watch the chat in thee parts below.

Asked if he has ever been directly confronted by a fan of the early IN FLAMES albums who simply cannot get into the band's later material, Anders said: "It happens once in a while." He continued: "As soon as you release an album, you're open to people thinking whatever they want. And that's fine.

"If you meet some drunk dude in a bar that tries to convince you that you should go back and do the same thing that you did when you were 20 years old, it's really hard to meet him half way [laughs], 'cause he's very determined. 'That's the right way for you to go.' And it it what it is.

"I love the albums that we've done. All the albums have been… they are the reason we are here today; it's all part of it. This album ['Siren Charms'] couldn't have been done without [2000's] 'Clayman' or [1997's] 'Whoracle' or any of the other albums. But we can't go back and recreate them; it wouldn't be right. We're not the same people, we're not the same age, we don't have the same equipment, we don't have the same producer… everything. It could be summer instead of winter. Whatever… The situation is different. And we could never make a carbon copy, and a carbon copy, an exact one, would be dead boring and not alive. And what we do now is take everything we've done with us and look forward. I love those albums for what they were and what they are. And if you're interested now, you're welcome to come and join the show."

"Through Oblivion" is taken from IN FLAMES' eleventh album, "Siren Charms", which is due in the U.S. on September 9 via Sony/RED. The CD was recorded at Hansa Tonstudios (DAVID BOWIE, DEPECHE MODE, U2) in Berlin, Germany. The cover artwork was created by Blake Armstrong of Space Boy Comics.