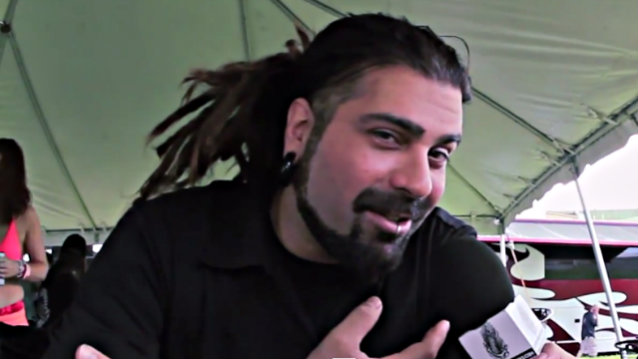 Jo Schüftan of Horns Up Rocks! conducted an interview with ILL NIÑO vocalist Cristian Machado at the July 27 stop of the Rockstar Energy Drink Mayhem Festival in in Hartford, Connecticut. You can now watch the chat below.

ILL NIÑO's new album, "Till Death, La Familia", was released on July 22 via Victory Records. Machado, told Arena.com that "Till Death, La Familia" "will absolutely surprise a lot of people." He continued: "I don't think we're the kind of band that releases the same album over and over. We always attempt to challenge ourselves musically in order to grow as artists and friends.

Speaking to 100% Rock Magazine, ILL NIÑO bassist Lazaro Pina stated about "Till Death, La Familia": "We try to do something different every record. I can tell you for sure that this one is going to demonstrate a whole new ILL NIÑO style. At first, it took a lot of courage, but I'm feeling so much better about it now that the vocal tracks are beginning to come in. It's turning out to be everything I think most of us envisioned it and kind of wanted in a new record. We're definitely taking ILL NIÑO to a new… an additional style. We're definitely bringing it up to 2014 and kind of creating our own thing. Hearing Cristian singing like he's never sung before and even innovating a new heavy style of singing and a new melodic style of singing. It's going to be interesting. I think that the fans'll appreciate it and hopefully some new ones will come on board and say, 'Hey. I really dig this band; I like what they've been doing throughout the years.' It is… I think it's a courageous record. It definitely does not sound like any other previous record. It's definitely ILL NIÑO demonstrating an additional style."