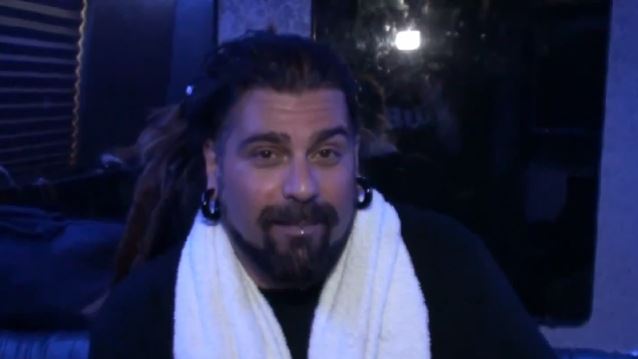 Each episode of "Tour Tips" features a touring act sharing five pieces of advice for artists who want to hit the road. In this episode, which was filmed on July 20 in Tinley Park, Illinois, ILL NIÑO vocalist Cristian Machado shares his tips for being on the road while on this past summer's Rockstar Energy Drink Mayhem Festival.

ILL NIÑO's video for the song "I'm Not The Enemy" was shot on the streets of Los Angeles. The clip tells a bold story of youthful injustice, overcoming social stereotypes and the dreams of constructing a better life.

The "I'm Not The Enemy" video was produced by Scott Hansen (OTEP, A DAY TO REMEMBER) and co-directed by ILL NIÑO bassist Lazaro Pina. The song highlights the band's distinctive dual guitar strike and groove-laden percussion while Machado scathingly questions authority: "I'm the bad guy in the backseat. Am I the enemy?"

"I'm Not The Enemy" is taken from ILL NIÑO's new album, "Till Death, La Familia", which was released on July 22 via Victory Records. Pina recently stated about the CD: "We're definitely bringing it up to 2014 and kind of creating our own thing. Hearing Cristian singing like he's never sung before and even innovating a new heavy style of singing and a new melodic style of singing. It's going to be interesting. I think that the fans'll appreciate it and hopefully some new ones will come on board and say, 'Hey. I really dig this band; I like what they've been doing throughout the years.' It is… I think it's a courageous record. It definitely does not sound like any other previous record. It's definitely ILL NIÑO demonstrating an additional style."