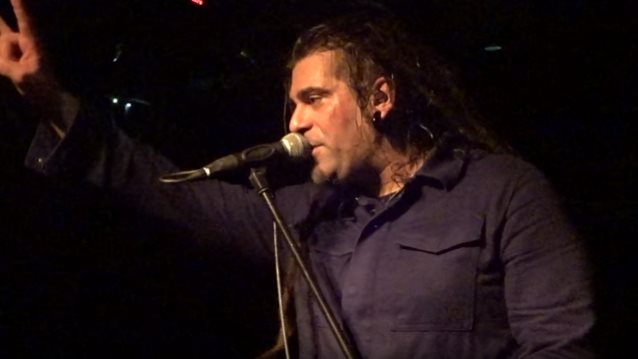 Latin metallers ILL NIÑO have begun writing material for their next studio album.

The New Jersey-based group, which is currently celebrating the fifteenth anniversary of their debut LP, "Revolution Revolución", with European and Australian tour dates, hasn't released a full-length record since 2014's "Till Death, La Familia".

Asked by Australia's "Rabid Noise" if a new ILL NIÑO disc is in the works, singer Cristian Machado said (hear audio below): "We are working on material. There's material that we started getting together individually, but, unfortunately, we all live in different parts of the United States. We're in different states and really spread out. It's not like we live in a state next to each and we can drive to each other; all of us have to fly. So we don't have a budget cleared yet as far as getting together and putting all the songs and sifting through all the ideas and picking the tracklist for the album."

He continued: "We definitely have 2018 as the year we wanna put out some music, but I think we've gotta be smart about what it is that we're gonna release and we really have to offer something that's far and beyond whatever we've done. And that's probably the more challenging thing that we can do in our career, but to do anything less, we'd be selling ourselves short and we'd be selling our fans fans short. So hopefully I can get the band to agree, like, 'Hey, let's really be thoughtful about the album and really be picky with the songs and let's really say something…' I don't wanna say 'that the world needs,' but that the world can truly understand."

Cristian added: "It's gonna be a challenge, the next album, for sure, but we're up for it, man. And I think we're lucky to still be around. And to be able to make albums in the state of mind that we are as musicians, and being a little bit more mature, is a blessing. We owe it to our fans. We definitely have to dig and at least offer them something that's just amazing, that makes me feel amazing."

Machado, who immigrated to America from Venezuela more than thirty years ago at age 11, told NorthJersey.com about the impact of ILL NIÑO's debut album: "I think having the title in both English and Spanish captured the spiritual and musical essence of the band. We wanted to find our own niche and bring parts of South America to our music. We were trying to put ourselves into the music however we could. We sounded different out of creative curiosity."