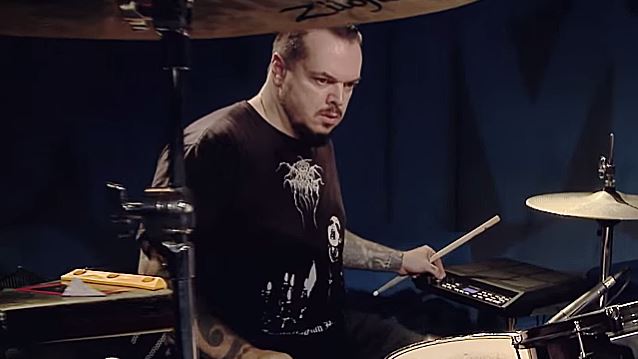 In a recent interview with Cvlt Nation, former SEPULTURA drummer Igor Cavalera spoke about his memories of the band's first-ever concert, which took place more than 30 years ago, in December 1984, in Belo Horizonte, Brazil. He said: "Yeah, man. That's pretty crazy. It was fucking awesome. But at the same time, nobody really understood anything."

He continued: "The SEPULTURA lineup for this concert was me, my brother [Max] and Wagner from SARCÓFAGO. So it was kind of crazy, because Paulo [the bass player for SEPULTURA] was on vacation from school, and he was basically gone on a trip. And some other dude that played guitar with us at the time couldn't make it to the concert because his mother wouldn't let him go. And he was way older than us. That's crazy, because he was 18 or even older, and his mother didn't let him go out at night, and we were like 12 or 13 years old and stayed the whole night out. So it was kind of bizarre.

"But the concert was really cool. We opened for OVERDOSE. I remember they asked us: 'Do you wanna play with us?' and nobody used to let us play anywhere back then. We played after OVERDOSE, and everybody left after we started. The only people that stayed were a punk guy and a skinhead that were kind of lost in Belo Horizonte because they were from out of town. Even our friends told us, 'This concert was terrible, man.' But we really like it, so it was this kind of an odd situation. And a really cool thing about this concert is that the owners of Cogumelo Records, João and Pati, were also there. They approached us to say they really liked the concert and talked about doing the split with OVERDOSE (released one year later, in 1985). So this show is historic since it started our partnership with the label."

Asked about OVERDOSE and SARCÓFAGO, two bands that later had some problems with SEPULTURA, Igor said: "Yeah, but it was different. We were kids, so we got into trouble with everybody. It was that thing of talking shit about each other, 15-year-old boys stuff, like a high school thing. So these problems were never really that serious."

He continued: "The other day I actually read something from some guys from Belo Horizonte [SEPULTURA's former hometown] that thought that SEPULTURA had a kind of conspiracy against the other bands. Like, how would that even be possible? Why we would stop doing our own stuff to do anything against other bands? That's not even possible, you know? So it was kind of funny to hear this kind of stuff. Even the problems we had at the time... if it wasn't because of other bands, it would be something else, like girls or soccer. I really see this as more of an adolescent thing rather than a real fight or something like 'the guys hate each other' or 'that band is this or that.' It was just some kids talking shit about each other and then we would eventually meet sometimes and get into fights. And it was a different time too. There wasn't a keyboard in front of you, so you could just keep talking shit. You had to do that face to face. So it was kind of funny, because there were more confrontations."

Igor added: "I was thinking the other day that back then kids would come to us and talk shit, like, 'You did this or that,' or that 'the band had sold itself.' And you don't see this anymore. Now guys just comment on YouTube and unload everything and that's it. Maybe the guy will even see you later and say, 'Hi.' I think these physical confrontation things, even the verbal type, are coming to an end. And that's kind of a sad reality. [laughs]"

Igor Cavalera left SEPULTURA in June 2006 due to "artistic differences." His departure from the band came five months after he announced that he was taking a break from SEPULTURA's touring activities to spend time with his second wife and their new son (who was born in January 2006).

Igor is the second Cavalera to leave SEPULTURA. In 1996, Max Cavalera exited the group after the rest of the band fired Max's wife Gloria as SEPULTURA's manager.

Igor and Max are currently collaborating on a project called CAVALERA CONSPIRACY. The group's third album, "Pandemonium", came out November 2014 via Napalm.