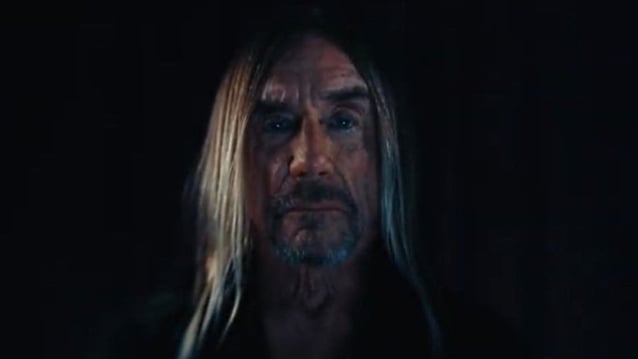 Iggy Pop has unveiled a striking and spare new video for "We Are The People" from his critically lauded album "Free" (Loma Vista Recordings). In the wake of last week's live rendition of the song by Iggy accompanied by Laurie Anderson at Carnegie Hall, the "We Are The People" clip imbues Iggy's interpretation of a poem written by Lou Reed in 1970 with a riveting new visual dimension. From the opening lines "We are the people without land. We are the people without tradition. We are the people who do not know how to die peacefully and at ease" to the song's slow fade, the effect of Iggy's close-up recitation is transfixing.

On Saturday, March 7 at Perrotin in New York City, Iggy will release a limited, numbered vinyl "test pressing" release of "Free", featuring cover art and creative collaboration with Maurizio Cattelan. Iggy Pop and Maurizio Cattelan will sign copies of this special "test pressing" vinyl which has been made available in 340 numbered units worldwide, including a bonus seven-inch single featuring two unreleased tracks exclusive to this special artistic collaboration: Iggy's a cappella rendition of "Brahms Lullaby" and "Epistle to Tromba", a heartfelt ode to a late canine companion. Each copy of this numbered edition of 340 will be enclosed in a resealable Japanese polybag. Concurrently, Perrotin is excited to present books and merchandise spanning Maurizio Cattelan's career, as well as a series of historic fine art prints of Iggy Pop, courtesy of the Morrison Gallery.

The limited-edition version of "Free" is available for purchase commencing at 10 a.m. on Saturday, March 7, while the signing will begin at 1 p.m. Perrotin is located at 130 Orchard Street in New York.

"Free" was originally released September 13, 2019 by Loma Vista Recordings. Featuring collaborators Leron Thomas (trumpet/keys/songwriting) and Noveller (guitar/vocals), the album holds a singular place in Iggy's canon — and has generated suitably unique praise: The New York Times called the title track "atmospheric and elusive" and praised the song "Sonali" as "a rushing, fluttering, quasi-waltz that hurries toward an undisclosed destination, whimsical but driven." Rolling Stone regaled Iggy's performance on the new record, "Pop flexes his baritone, expressing himself more clearly than perhaps ever before." And The Washington Post noted "Iggy haunts these new songs like a dignified spirit — which might make 'Free' an exposition on death, or transcendence, or both."