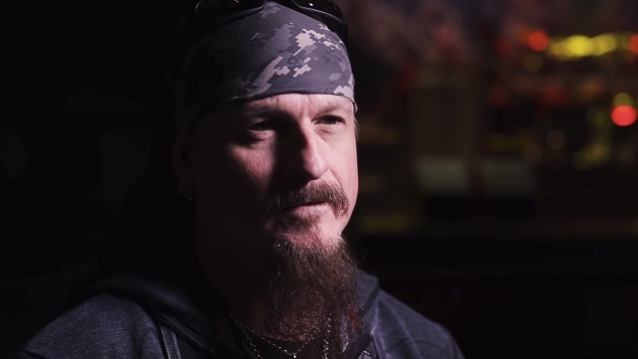 Dr. Guenther Dobrauz-Saldapenna of Appetite For Disruption recently conducted an interview with ICED EARTH guitarist Jon Schaffer. You can now watch the chat below. A couple of excerpts follow (transcribed by BLABBERMOUTH.NET).

On having to make tough decisions as the leader of ICED EARTH:

"Well, there's a myriad of tough decisions that take place on a daily basis almost with setting short-term and long-term goals. But when it comes to personnel changes, when you're dealing with artists, that's difficult, because it's not as cut-and-dried as it is if you're… My father was a pharmacist and we had a family pharmacy. And [if] a cashier wasn't doing their job — done; you're fired; you're out. Or if somebody wasn't doing their job. But when you're dealing with artists, it's more emotional and you develop a different kind of a bond when you're in a band together and you're out on the road. But there's been many talented people in ICED EARTH through the years, and I've been fortunate to have had a lot of talented guys come through the band, but sometimes you don't have that awesome personal chemistry, so you need to make a tough decision. Maybe the talent's great, but there isn't that sort of a bond which I believe that it leads to another percentage of positive energy that happens on the stage and behind the scenes and everything. So you can have a bunch of talent and then no real personal chemistry and you can still get the job done, or you can have a situation where you have some really great personal chemistry and maybe not the best talent.

"I'm a man of my convictions and my father raised me to be that way. And it's not a popularity contest, believe it or not. It's about my art and staying true to my art and whatever the consquences of that are. And that's the driving force within me — the desire to write songs that touch people and to propel the vision forward. And that's what I've always been chasing since the very beginning, what's been going on in my head. I feel very fortunate that in the current lineup of the band that we have all of this personal chemistry as well as everybody's got their chops and is really amazing at their individual instrument. A lot of guys are into it 'cause they're after the money and after that, but it's really just always been about songcraft and making cool records that are gonna hopefully stand the test of time and will be there for people to enjoy long after I'm gone. And so making tough decisions along the way to preserve the integrity of the brand that I've built, that's fine with me."

On having to make changes in the ICED EARTH lineup in order to protect and grow his business:

"People bring different abilities to any given situation, and some people don't pull their weight. Anybody that has a business knows that, and it doesn't matter what that business is. I carry the vast majority of the weight. When we're rehearsing together and we're onstage together, we're all putting it in, but there's so much more that goes into running a band, running any business for that matter, than what the appearance is to the public. So there's times when decisions have to be made. Every dynamic in every band is different, but at the end of the day, as soon as you put your product out into the marketplace, it's a business. It starts in the purest form possible as art, but the minute it's made into a product and sold, it's business and there's way more to it than the idealism that people see. We've turned into a society of snowflakes where people are just weak and entitled, and they don't understand what it means to really pay dues. So I don't have time for that shit. I've been working my ass off since I was a teenager, and that's the only way I know. So if you're not willing to do that, then go find somebody else to feed off of."

As previously reported, Schaffer has teamed up with his old pals in PURGATORY, the band that he originally founded in 1985, then later became ICED EARTH, to record five tracks that were written between 1985 and 1987, now to be released as the "Purgatory" EP on December 21 through Century Media. The effort features liner notes or comments of Schaffer, Gene Adam, Greg Seymour and Bill Owen and fitting cover artwork by David Newman Stump and Roy Young, known from their excellent work on ICED EARTH's latest album, "Incorruptible". The greatest surprise might be Gene Adam, ICED EARTH's original singer who sang on the band's self-titled debut album from 1990, who delivers his best vocal performance ever.

"Purgatory" is dedicated to Richard Bateman, the band's original bass player, who passed away right before the EP went into production.