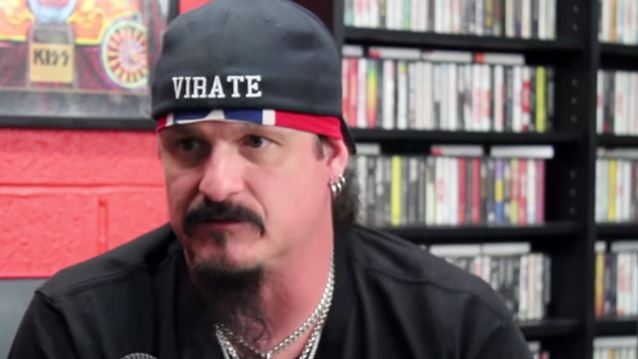 ICED EARTH was recently forced to cancel a number of festival appearances and headlining shows this summer so that the band's guitarist and leader Jon Schaffer could undergo surgery to address continued pain from a neck injury he suffered nearly 20 years ago.

In a new message on the band's Facebook page, Schaffer writes:

"I played guitar a few weeks ago for the first time, and it immediately felt like the surgery worked. Needless to say, I was very relieved.

"Through many months of the 'Worldwide Plagues Tour', I was suffering from a loss of coordination in my hands, numbness, and intense levels of pain. It was a battle every night onstage and it reached a critical point where the cervical fusion had to happen, sooner rather than later. I am happy to report that so far things are going very well in my recovery, and I expect it to stay on this path.

"We are in the planning stages of our next U.S. tour, and that will very likely take place this winter. So, before you know it we'll be back on the warpath, and before long, songwriting will commence, and another chapter of ICED EARTH history will be in the making.

"There will be lots of updates in the coming months.

"We are forging the attack as I am recovering from surgery.

"The boys and I are ready to get back out there [as soon as possible] to lay down the metal!

"Thanks so much for your concern and support!"

Schaffer previously stated about his need to go back under the knife: "I underwent surgery on my neck in the year 2000, due to an onstage injury that occurred in 1996. Since that time, I have battled with this problem, and it has begun to accelerate in the past several months, causing additional issues that can no longer be ignored.

"In February, while on tour in Europe, I underwent highly specialized treatment in Germany from a doctor who has helped, among many others, Tony Iommi and Eddie Van Halen. This treatment helped sustain my ability to perform so that we could complete our Worldwide Plagues Tour. However, I am now forced to take further, more invasive action sooner than I intended in order to maintain my overall health.

"Surgery was originally planned to take place in September during our break, but I have now been advised to have the procedure completed sooner rather than later.

"As much as it pains me and everyone else in our camp to have to cancel these dates, this is something that cannot be put aside any longer."

ICED EARTH 's latest album, "Plagues Of Babylon", sold around 6,300 copies in the United States in its first week of release to land at position No. 49 on The Billboard 200 chart. The CD was recorded at Principal Studios (KREATOR, IN EXTREMO, GRAVE DIGGER) in Senden, Germany and was mixed at NHow Studios in Berlin, Germany.

Jon Dette (SLAYER, TESTAMENT, ANTHRAX) sat behind the drums for ICED EARTH's most tour, taking over for Raphael Saini, who filled in during the summer 2013 festivals, the recording of ICED EARTH's new album, and the club leg of the VOLBEAT 2013 tour.