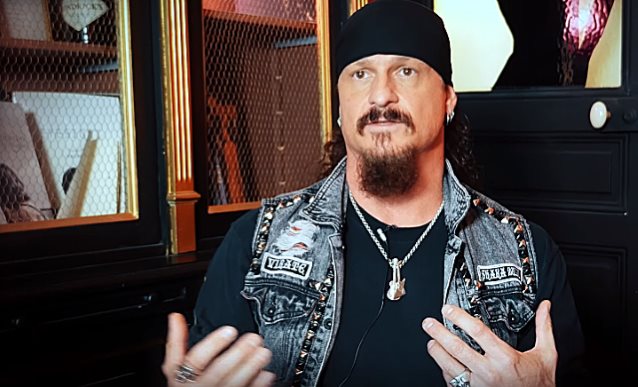 ICED EARTH guitarist and mainman Jon Schaffer was recently interviewed by Christian Garrel of France's Duke TV. You can now watch the chat below.

Speaking about the current state of American politics, Schaffer said: "I don't vote in the federal elections anymore. The system is so criminal, and… I guess my only… The thing that, I guess, was a little bit hopeful was that it shows that the American population… And I know the media says a lot of things about [President Donald] Trump that are… you know, he's a racist and all this stuff. And you know what? I don't even know what to believe anymore. I don't know if it's true, because I don't trust the media. I don't trust the government. When they try to demonize somebody — anybody — I have to think, 'What's the motive?' Because they don't have any credibility with me at all."

He continued: "Fortunately, I think that the best thing that can happen from the people standpoint is just to educate themselves, to continuously question everything that they're being told and not get into a position where you're relying on government. And most of the networks that we have in the States are mouthpieces for the government, whether it's CNN or whatever… Fox News… Even though they play the fake left-right paradigm against you, you're being brainwashed. I mean, every time you're sitting in front of a television, you're getting into a calm state of mind where you're accepting what they're telling you as reality, and it isn't reality. And that's the one thing that I see is changing — people are really starting to talk about things that matter."

Schaffer added: "The only elections I take part in at all are in my local community, and I will go as far as my state elections, but outside of that, I'm done until… I mean, obviously, if we have a complete collapse, which I think is probably the only thing that's gonna break the system down, because I don't believe that all-out war is a good idea, and I'm not even sure that we would have a good outcome with that. It's not like it was in the American Revolution, so it's gotta be a spiritual revolution, almost. It has to be a new age of enlightenment, where people really wake up — a new renaissance, as it were — and hopefully that can be achieved without violence."

Schaffer — who has previously described himself as "a constitutional conservative" — last year said he didn't believe that Trump lost the popular vote to Hillary Clinton, explaining that "three million illegal immigrants" voted in the most recent presidential election.

ICED EARTH's new album, "Incorruptible", will be released on June 16 via Century Media. The cover artwork for the disc (as well as additional illustrations to every song) was created by David Newman-Stump from Skeleton Crew Tattoo (pencil illustrations) and Roy Young (colors).