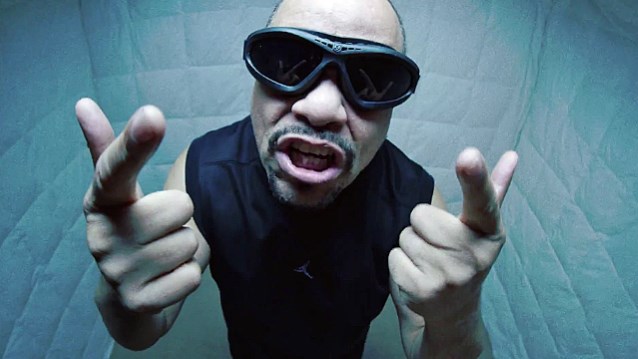 BODY COUNT, the metal band fronted by hip-hop legend, actor and director Ice-T, has released a video for its cover version of the SUICIDAL TENDENCIES classic "Institutionalized". The track, which was included on BODY COUNT's 2014 comeback album "Manslaughter", saw Ice-T modernizing some of the lyrics, adding references to Xbox, email passwords and vegans.

Speaking to Esquire magazine, Ice-T stated about BODY COUNT's decision to cover "Institutionalized": "BODY COUNT gives nothing but respect to SUICIDAL, because they were the first West Coast band to kinda bring that gangbanger thing to rock. It was skater-gangster. I wanted to pay homage to them."

He continued: "I think when you remake a record, it's twofold. It's not just the remake, it should be the homage to the other artist.

"At the end of our version of 'Institutionalized', I say 'Suicidal!' because I don't want anyone for one minute thinking I invented that or am trying to pass it off that way. I don't need to. That one rocks in concert, too."

"Manslaughter" sold around 3,600 copies in the United States in its first week of release to land at position No. 102 on The Billboard 200 chart. The record arrived in stores on June 10, 2014 via Sumerian.

In the Esquire interview, Ice-T stated about his decision to bring back BODY COUNT: "The band wanted to get back together. The band lives in L.A., and I live [in New Jersey], so Ernie [guitar] was calling me, saying, 'Ice, let's rock and roll!' I said that I didn't want to do a mixtape. I don't want to do another album unless I write the music, because on the previous album, in 2006, I kinda mailed it in. They wrote the music in L.A. and sent me the tracks, I wrote the lyrics, and I just kinda walked away. I didn't mix it, I didn't do anything to it, and the record suffered. And I didn't want to do another one unless we had a real shot at making a good record together."

Regarding how the Sumerian deal came together, Ice-T said: "Vince [bassist Vince Dennis, a.k.a. Vincent Price; STEEL PROPHET] was connected to Juan [guitarist Juan Garcia, a.k.a. Juan Of The Dead; AGENT STEEL, EVILDEAD] and Juan had connections to Sumerian Records. The head of the label, Ash Avildsen, is a BODY COUNT fan. He had a little money to throw at the project and he didn't care about previous sales or anything. When you're lucky enough in this business to run into a real fan, they're like, 'Let's just do this!' You need someone in this business who just believes in you, that's not doing that SoundScan and all that other shit. Not doing the numbers, but doing the — [Ice taps his fist into his left hand three times]."

BODY COUNT's current lineup includes bassist Vince Dennis (a.k.a. Vincent Price; STEEL PROPHET) and guitarist Juan Garcia (a.k.a. Juan Of The Dead; AGENT STEEL, EVILDEAD), the latter of whom made his live debut with the group in November 2013 at the Fun Fun Fun Fest in Austin, Texas.