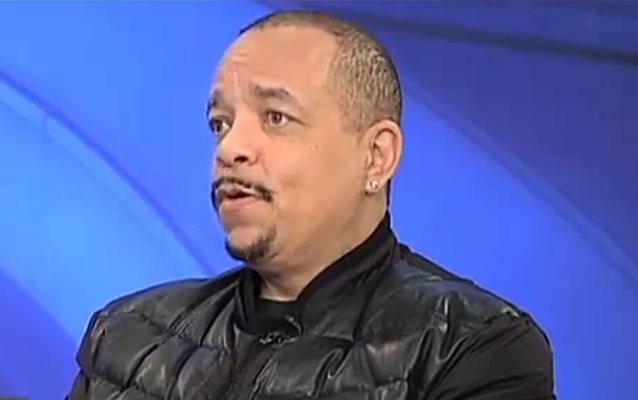 Video footage of hip-hop legend, actor and director Ice-T talking to NY1 about "Manslaughter", the new album from his metal band BODY COUNT, can be seen below.

"Manslaughter" was released on June 10 via Sumerian. Ice-T recently stated about the CD: "People have been asking me to do some music, and I haven't really been inspired to do hip hop for a while, 'cause hip hop kind of got really pop to me. But my band always wants to play, so we decided to do an album. And it's brutal. It's brutal."

Regarding the song "Bitch In The Pit", which can be streamed below, Ice-T told Revolver magazine: "Most of the inspiration for my records is that I plan on singing them onstage. So I try to think of things that the crowd is going though or I'm going though.

"Every time we do a show, you're always staring at that mosh pit and there's usually that one girl in there or a couple of girls in the middle of the mosh pit and they're very interesting. So I was thinking this is a way I could dedicate a record to the girls that go to the rock concerts and go hard. It never fails. It's kinda like a true story. It's an homage to the girls that really get in the mosh pit with the guys."

BODY COUNT's current lineup includes bassist Vince Dennis (a.k.a. Vincent Price; STEEL PROPHET) and guitarist Juan Garcia (a.k.a. Juan Of The Dead; AGENT STEEL, EVILDEAD), the latter of whom made his live debut with the group in November 2013 at the Fun Fun Fun Fest in Austin, Texas. The band's set included first-time airings of new songs "Talk Shit, Get Shot" and the "Manslaughter" title track.

The "Talk Shit, Get Shot" video was filmed on April 6 at The Morgan in Brooklyn, New York with director Frankie Nasso, who has previously worked with EMMURE and ASKING ALEXANDRIA, among others.

BODY COUNT will take part in this summer's Rockstar Energy Drink Mayhem Festival, which kicks off on July 5 in San Bernardino, California.