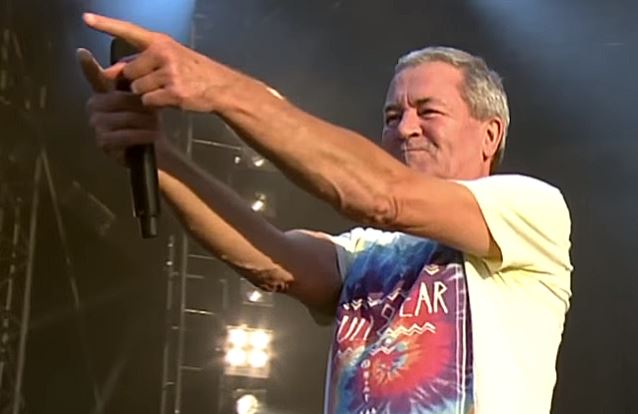 DEEP PURPLE singer Ian Gillan has defended the band's decision to only perform with the group's current lineup at the upcoming Rock And Roll Hall Of Fame induction, explaining that "there is no slight intended nor any desire to upset anyone" with this move.

The Rock And Roll Hall Of Fame induction ceremony seemed like a rare opportunity for DEEP PURPLE to reunite with its founding guitarist Ritchie Blackmore, who wrote many of the band's most memorable riffs, including "Smoke on the Water", but hasn't played with the group since 1993.

Now Gillan has confirmed that no such reunion will take place, saying that only "the living breathing DEEP PURPLE" will play at the event, which will take place on April 8 at the Barclays Center in Brooklyn, New York.

"Ian Gillan, Ian Paice and Roger Glover decided upon the offer of a compromise which has been agreed with the Hall Of Fame and enables us to turn up on the night.

"DEEP PURPLE inductees will accept the awards and then the living breathing DEEP PURPLE will perform.

"It should be stressed that there is no slight intended nor any desire to upset anyone regarding this decision; it is purely a mark of respect to Steve and Don.

"I spoke with David Coverdale last week and he expressed complete understanding of the way it was being handled. Thanks, David. You're a gent.

"Outside of this event, there are no circumstances under which a 'reunion' could or would take place.

"So, let's all get up there, shake hands, smile for the cameras and get it done with dignity and respect for all the existing and past members of a very special family."