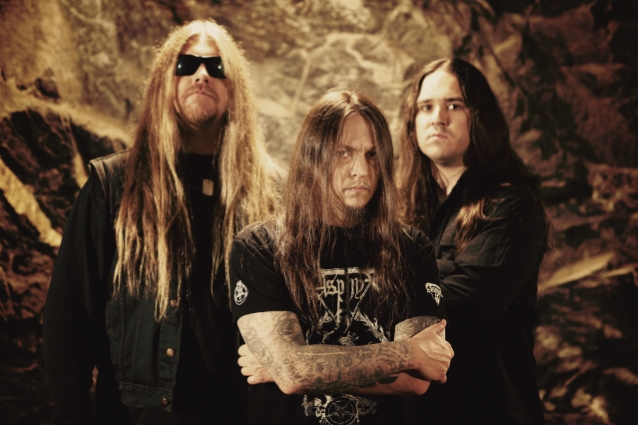 Legendary Swedish deathsters HYPOCRISY have completed work on their long-awaited new studio album. The follow-up to 2013's "End Of Disclosure" is tentatively due later in the year via Nuclear Blast Records.

The news of the HYPOCRISY LP's completion was broken by mainman Peter Tägtgren on Friday. He posted an Instagram picture of him raising a glass and he wrote in an accompanying caption: "HYPOCRISY ALBUM IS DONE!!! 11 songs, 52 minutes.. mastered and done! Let's celebrate. Now it's up to the record company to find a good release date."

In 2018, Tägtgren told Australia's Sticks For Stones that the musical direction of HYPOCRISY's next album would be "a mix between old and new HYPOCRISY."

"End Of Disclosure" was was produced by Tägtgren at his Abyss Studio in Sweden. The artwork was created by Wes Benscoter (SLAYER, KREATOR, NILE, VADER).

HYPOCRISY's "Hell Over Sofia - 20 Years Of Chaos And Confusion" DVD/CD was released in October 2011 via Nuclear Blast. The disc contained footage of the band's February 27, 2010 concert at the Blue Box club in Sofia, Bulgaria.