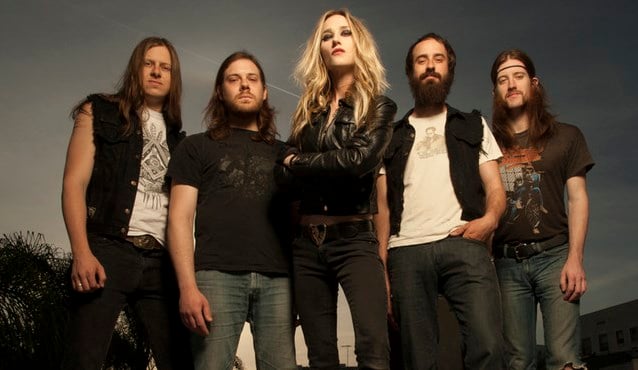 "Zenith", the new video from the Los Angeles-based, occult-themed traditional heavy metal band HUNTRESS, can be seen below. The song comes off the group's sophomore album, "Starbound Beast", which was released on June 28 in Europe and on July 2 in North America via Napalm Records. The CD was recorded at Hobby Shop Studios in Los Angeles with producer Chris "Zeuss" Harris (SHADOWS FALL, HATEBREED, MUNICIPAL WASTE). The cover artwork for the effort was once again created by Vance Kelly (THE SWORD, GRAVEYARD, HIGH ON FIRE, PENTAGRAM, ALICE IN CHAINS, AVENGED SEVENFOLD, DEATH ANGEL), who previously worked on the group's debut album, last year's "Spell Eater".

Director Phil Mucci, who helmed the "Zenith" clip, spoke about working with HUNTRESS singer Jill Janus: "Jill doesn't compromise; she wanted something her fans would cherish for years to come. In a disposable world, she's very conscious of her legacy, as am I. It's more than a music video to us. It's a gateway drug."