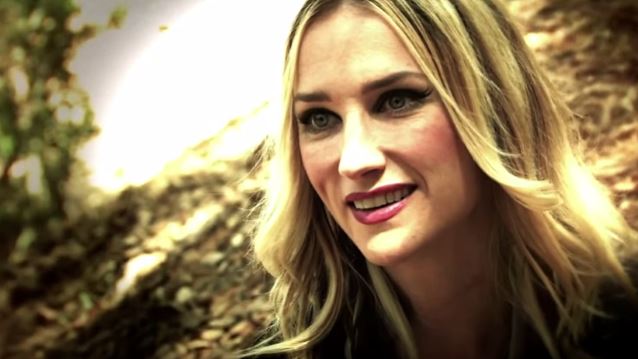 Iñigo Dominguez Diaz of Spain's GoetiaMedia.com conducted an interview with singer Jill Janus of the Los Angeles-based, occult-themed traditional heavy metal band HUNTRESS before the band's February 7 concert in Barcelona as the support act for AMON AMARTH. You can now listen to the chat below.

Speaking about HUNTRESS's musical approach on its third studio album, which is being helmed by the production duo of Paul Fig (ALICE IN CHAINS, GHOST, RED LINE CHEMISTRY) and James A. Rota ("Sound City" movie, FIREBALL MINISTRY), Jill said: "It's the third album in the trilogy, so it's the dying phase of death, so you're gonna hear the viciousness, you're gonna hear a little bit more catchy. You're gonna hear songs that maybe are a little catchier, a little bit progressing. And it's very organic, very natural in the evolution. We're modern yet the sound is natural. We don't play with a bunch of bullshit technology. We play instruments; that's what we do. And I don't have any voice modulators; what you see is what you get. When I'm on stage, what you're seeing and what you're hearing is genuine. I'm just me and a microphone. So on this next album, you're gonna hear that very authentic, true sound of heavy metal."

HUNTRESS guitarist Blake Meahl recently told MikeJamesRockShow.com about the band's forthcoming CD: "Our goal for this record, and for every record since our first one, is to get more organic and real with it."

He continued: "The first two producers that we worked with, they liked to stick with that modern, edited sound where they're going, they're snapping things around and making sure, visually, everything lines up so it sounds extra tight. It's a byproduct of a little bit of Pro Tools and the whole situation. But you don't have to do it that way. The production we've got this time is awesome, 'cause they're using that technology, but we're doing full takes of everything and we're not editing things up. It's, like, yeah, if there's a fuckup, we'll punch it, but it's not all mechanized."

Blake added: "All my favorite records are the old ones, and I think part of that is that real natural energy of sound of that human push-pull. When it's all glossed like that, it just slides right by. Everything is so even, it doesn't feel musical."

"Starbound Beast" included the track "I Want to Fuck You to Death", which was co-written for Jill Janus by legendary MOTÖRHEAD frontman Lemmy Kilmister.