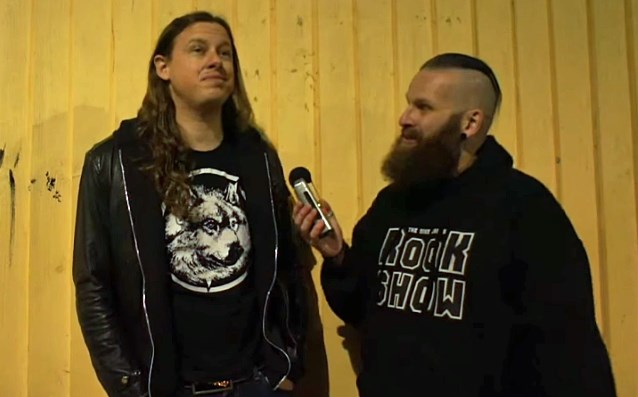 MikeJamesRockShow.com recently conducted an interview with guitarist Blake Meahl of the Los Angeles-based, occult-themed traditional heavy metal band HUNTRESS during the group's European tour as the support act for AMON AMARTH. You can now watch the chat below.

Speaking about the progress of the recording sessions for HUNTRESS's third studio album, which is being helmed by the production duo of Paul Fig (ALICE IN CHAINS, GHOST, RED LINE CHEMISTRY) and James A. Rota ("Sound City" movie, FIREBALL MINISTRY), Blake said: "We're trying to get our record finished, and we keep getting these insane tour offers that are impossible to decline. We did [the] Download [festival in England in June], came home, wrote the album, left for [another] tour, then came back and started tracking it. And now as soon as we get back from [the European tour with AMON AMARTH], we'll finish it up."

He continued: "We got it all ready and written. It's just the powers that be that make it really tough between booking schedules and timing and tour timing and then everybody's availability being the same and money coming at the right time to pay for it, and all that."

Regarding HUNTRESS's approach for the upcoming CD, Blake said: "Our goal for this record, and for every record since our first one, is to get more organic and real with it."

He continued: "The first two producers that we worked with, they liked to stick with that modern, edited sound where they're going, they're snapping things around and making sure, visually, everything lines up so it sounds extra tight. It's a byproduct of a little bit of Pro Tools and the whole situation. But you don't have to do it that way. The production we've got this time is awesome, 'cause they're using that technology, but we're doing full takes of everything and we're not editing things up. It's, like, yeah, if there's a fuckup, we'll punch it, but it's not all mechanized."

Blake added: "All my favorite records are the old ones, and I think part of that is that real natural energy of sound of that human push-pull. When it's all glossed like that, it just slides right by. Everything is so even, it doesn't feel musical."