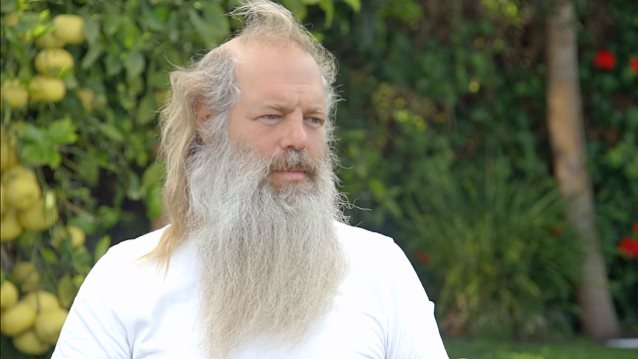 Legendary producer Rick Rubin spoke to Rolling Stone magazine about his work on METALLICA's last studio album, 2008's "Death Magnetic", considered by many a return to the band's thrash metal roots. Rubin said: "They had made that movie, 'Some Kind Of Monster', which I thought was really bold of them to make, because it showed them lost.

"The main goal of our work together was to get them to re-embrace being METALLICA, feeling okay to be a heavy metal band. In some ways, they had already done that, but before that, they had tried to reinvent themselves in different ways.

"I tried to get them to re-engage with everything everybody fell in love with, with METALLICA, in the first place. I got them to listen to the music that they were listening to at the time that they made 'Master Of Puppets', those influences. I asked them to live with those influences and spend more time playing together as a band.'

He continued: "They'd fallen into a trap of using the studio more as an instrument and punching in parts to get the perfection they were looking for than they were getting through raw performance power. It was about getting them to not try ideas by editing them together with a machine, but to try playing them in different orders to see what they felt like. And they really ended up getting back to being a band.

"Anytime Lars [Ulrich, METALLICA drummer] would want to sit at the computer and try and write, I would insist that he and the band would all play together. [Laughs] Some of it was just a habit for them. It's easy to try a lot of ideas if you don't have to play them. But if you're playing one part and it's going to go into the next part, you might play the first part or the second part slightly differently, and the way that they bleed into each other or oppose each other can happen in a way that's musical. You can hear that here. That doesn't happen when you randomly click pieces together."

Rubin went on to say: "The other writing experiment I challenged them with was, 'Imagine there was no such band as METALLICA. Imagine you guys are in the band that you are in, this band, and you're going to play in a 'Battle Of The Bands.' You want to blow people away. What does that sound like? Without the baggage of thinking it needs to be any certain thing, what is the thing that you feel like will tear the heads off of the audience?" It really worked out good. I love that whole 'Death Magnetic' album.

"Death Magnetic" was officially certified double platinum by the Recording Industry Association of America (RIAA) on June 28, 2010 for shipments in the United States in excess of two million copies.

Ulrich told The Pulse of Radio in an October 2008 interview that he didn't understand the controversy that had broken out over the audio quality of "Death Magnetic" shortly after the LP's release. Some fans and publications had accused the group and Rick Rubin of mixing the album at such a loud volume that the music is distorted and difficult to listen to. But Ulrich said that he's more than happy with the way it turned out. "I listen to this record, and I listen to it every couple of days," he said. "And when I hear it, it puts a smile on my face and it blows me away, and I don't understand what people are talking about. Somebody told me the other day that there were 12,000 people that had signed a petition to remix the record. We've sold two and a half million copies [worldwide] of 'Death Magnetic'. You do the math yourself."

A number of fans said online that they prefer the versions of the CD's tracks prepared for the Guitar Hero video game, which are mixed differently.

Ted Jensen, the engineer who mastered the album at Sterling Sound in New York, responded to fan complaints that the CD is too loud and the audio is pushed to distortion levels by writing, "I'm certainly sympathetic to your reaction, I get to slam my head against that brick wall every day. In this case the mixes were already brick-walled before they arrived at my place. Suffice to say I would never be pushed to overdrive things as far as they are here. Believe me, I'm not proud to be associated with this one, and we can only hope that some good will come from this in some form of backlash against volume above all else."

Mastering is the process of preparing and transferring recorded audio from a source containing the final mix to a data storage device, the "master," from which all copies will be produced.

Blame for the sound quality has been laid at the feet of the band itself, Rick Rubin and his recording engineer, Greg Fidelman.