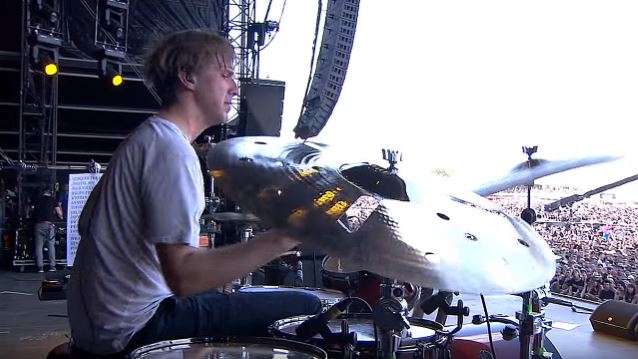 Less than a week after he was officially announced as the new drummer for AVENGED SEVENFOLD, Brooks Wackerman spoke to Metal Hammer magazine about the circumstances that led to his joining the band.

Asked how he celebrated landing the gig, Wackerman said: "The first thing I did was go and tell my wife, and she gave me a kiss and we hugged. It was quite a poignant moment. And she said, 'Go get 'em, tiger!' [Laughs] Then I called my father and told him, who's a music educator but wasn't familiar with the band. So I showed him and few of the videos and he's just my biggest supporter. I think just telling my family of what I was about to do was an exciting element."

In announcing Brooks's addition to AVENGED SEVENFOLD, singer M. Shadows said: "Brooks' name has always been in the mix. It was one of the names we were throwing around when Jimmy [original drummer James 'The Rev' Sullivan] passed away in terms of who was going to step up for [2010 album] 'Nightmare'. We felt Mike [Portnoy, ex-DREAM THEATER] was the right choice and we still feel that way. But at the time, our tour manager brought up Brooks' name as well. But at the time, he was also busy with BAD RELIGION and it was also…. People were going to look at it differently because he was a punk drummer at this point."

Wackerman added: "I've been a fan of the band for a decade and when [Shadows] gave me the call last year, I was absolutely thrilled. I was yearning for something new, a different style and during that time is when I got the call."

In addition to playing with BAD RELIGION, Wackerman has in the past played with SUICIDAL TENDENCIES and INFECTIOUS GROOVES, while also doing session work for KORN, Avril Lavigne, TENACIOUS D and others.