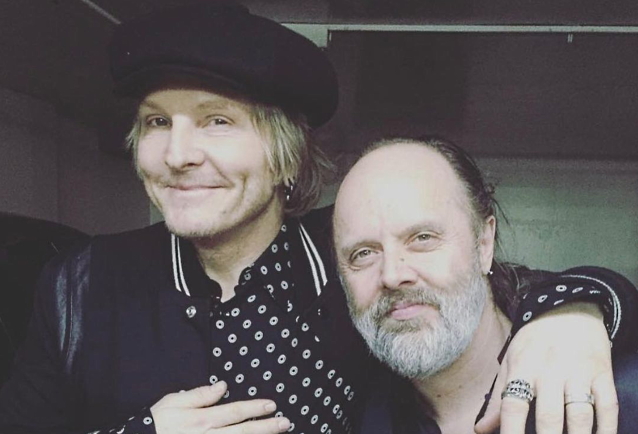 Matt Sorum has wished Lars Ulrich a happy 57th birthday, saying that the METALLICA drummer "has always been there as a friend."

On Saturday (December 26), the former GUNS N' ROSES drummer took to his Instagram to share a personal snapshot of him and Ulrich, and he included the following message: "Happy Birthday to my pal of 31 years Lars Ulrich.. We met when THE CULT opened the Justice For All tour and spent many nights on the road together living the life of Rock N Roll. THE CULT did close to 6 months on that tour and the adventures were insane and are still with me to this day. After that we remained close as Lars was the one that gave Slash my phone number to get in GNR. Of course the Epic GNR , METALLICA Stadium tour was legendary. Besides all of the musical accolades most importantly he has always been there as a friend . @larsulrich @metallica".

Matt has said in the past that a GUNS reunion tour should have included both him and Adler, with each playing the songs they recorded with the group. Sorum was inducted as a member of the band into the Rock And Roll Hall Of Fame in April 2012.

Sorum's autobiography, "Double Talkin' Jive: True Rock 'N' Roll Stories From The Drummer Of Guns N' Roses, The Cult, And Velvet Revolver", will now arrive in April 2021 after being delayed due to the coronavirus pandemic.