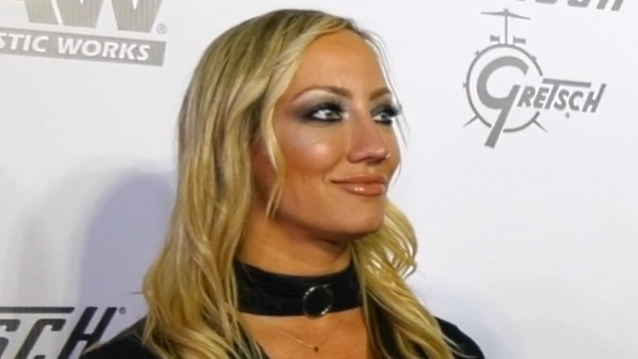 Nita Strauss, the Los Angeles-based guitar shredder for the ALICE COOPER band, was asked by "The Blairing Out With Eric Blair Show" how the legendary rocker's Christianity has affected the group's touring. "I don't think it affects it that much, because we're all people of faith, we're all people that are really respectful," she said (see video below). "It's not like anybody's out there cheating on their wives or getting super drunk every night or doing drugs. We're in a really healthy environment. And whether or not you can attribute that to Alice's faith, I think it could play a big part in it. But by and large, it's just a good group of people."

The 70-year-old Cooper has been outspoken about his religious awakening for quite some time. In a 2018 interview with New York Daily News, he said: "My wife and I are both Christian. My father was a pastor, my grandfather was an evangelist. I grew up in the church, went as far away as I could from it — almost died — and then came back to the church."

Although he struggled with alcoholism before embracing religion, Alice said that he doesn't have trouble reconciling his shock-heavy musical persona with his religious beliefs. "There’s nothing in Christianity that says I can’t be a rock star," he said. "People have a very warped view of Christianity. They think it's all very precise and we never do wrong and we're praying all day and we're right-wing. It has nothing to do with that."

Nita's debut solo album, "Controlled Chaos", was released in November via Sumerian Records. The disc was fueled by a Kickstarter campaign which generated over 600 percent of what Strauss was hoping to raise to help offset the costs around creating the record and touring it.