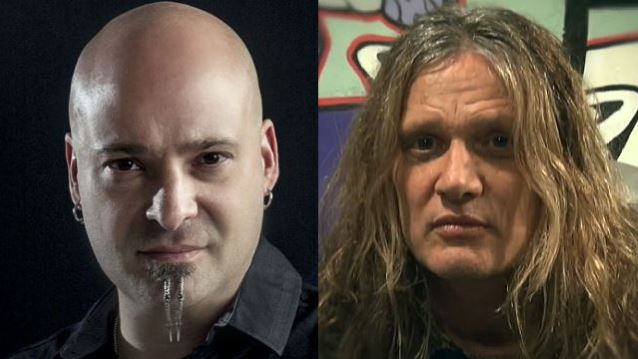 On March 16, Baby Huey and Chasta of the San Francisco radio station 107.7 The Bone conducted an interview with DISTURBED singer David Draiman. You can now listen to the chat using the widget below.

Asked why he attended former SKID ROW singer Sebastian Bach's August 2015 wedding to model Suzanne Le in San Jose, California, Draiman said: "We are good friends. I introduced him to his wife. She's a longtime friend of my wife [Japanese-American model, actress and wrestler Lena Yada]. [His wife and my wife] used to do Hawaiian Tropic pageants together back in the day, so that's where they met originally. And when Baz fell out of his last relationship, [Suzanne] had always mentioned to me how much she had a thing for him. So I'm, like, 'Okay, I've got a girl for you, but she's a good girl.' It took some prepping. But he's been amazing. He's a great source of inspiration. He's a ridiculously talented guy, and certainly a good friend."

Triple date night with our good friends Dave Draiman from Disturbed and his lovely wife Lena, the unbelievably bad ass...