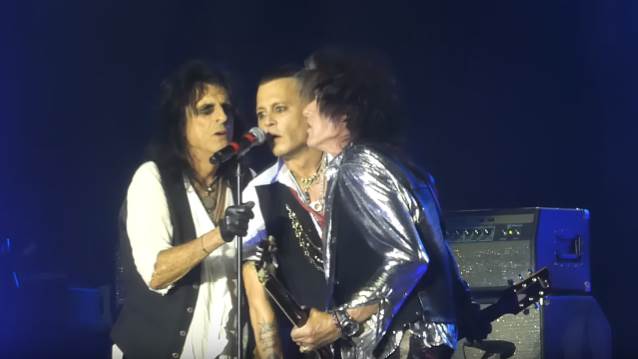 Fan-filmed video footage of HOLLYWOOD VAMPIRES' May 21 concert at Sands Casino Event Center in Bethlehem, Pennsylvania can be seen below.

Cooper told the Evening Standard that fans will be shocked when they hear Depp play guitar.

"He's not new to playing on stage," Alice said. "People are going to be very surprised when they hear him play, because they know him as Jack Sparrow.

"When they see a guitar in his band, they going to say, 'Wait a minute! I didn't have any idea he could play like that.' He's a real guitar player. I wouldn't be working with anybody that wasn't as good as anybody I've worked with normally.

"Last year, we were testing the waters to see if people were even going to be interested in what we were doing, and we found that they were; we got great reactions and sold out quite a few places. I think a lot of that might have been out of curiosity — Joe Perry, Johnny Depp and Alice Cooper; what a weird combination."