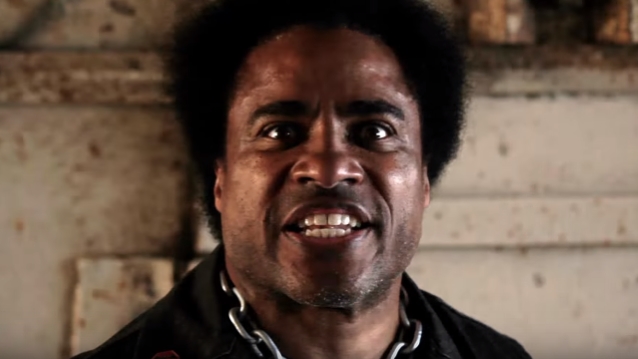 Austrian webzine Stormbringer conducted an interview with frontman Katon W. De Pena of California thrash metal veterans HIRAX at this year's Kaltenbach Open Air, which was held last month in Spital Am Semmering, Austria. You can watch the entire chat below. A few excerpts follow (transcribed by BLABBERMOUTH.NET).

On the band's formation:

Katon: "We started out back in 1984, basically, besides coming straight out of the garage practicing, writing music, writing our own songs, that was important to us. We didn't want to be a cover band or tribute band or any of that shit. We wanted to write our own music, then we started doing shows, then believe it or not, more people showed up than we thought would show up. We started attracting a lot of attention, then we figured we should do a demo, so we recorded a four-song demo that got to Metal Blade Records and that's how we got signed. From that point, it just got crazy. A lot of magazines out of England and Germany started picking up and reviewing the demo, then we released our first album. Yeah, '84 was the beginning of the whole thing. We've been around before that, a little bit earlier, like '82, '83, under a different name. We were playing locally with bands like SLAYER and METALLICA. We all came out of the same area. We have a long history with bands like METALLICA and SLAYER, DARK ANGEL, MEGADETH. Stuff like that."

On seeing bands like METALLICA and SLAYER become popular while HIRAX remained essentially an underground band:

Katon: "It was cool. For me, I never had any weirdness about that because I knew what we wanted to do. I think when you start your band, you have to kind of have a vision about what style you want to do. If you want to go commercial or stay true to whatever style. For us, it's always been about the underground metal. Obviously, people like money, but it's never been about money for us. It's about putting out music from the heart and being true to what we believe in, which is thrash metal. Even now, years later, now, we're picking up in popularity. It's not like we got into it to be popular. We got into it because we love the music, but it's kind of cool when you get bigger and then you can make a little bit more money and travel. Now we travel the world. It might have taken us 30-something years, but better late than never."

On whether he's in touch with the old thrash bands:

Katon: "MEGADETH, EXODUS, all the Bay Area bands, TESTAMENT, DEATH ANGEL… METALLICA, not so much because they're a different band than they were when they started out, they're a different organization. Sometimes, not to say bad things, but they're in a different world than we are. We're really happy with being a part of the metal scene that we come from and they're way different. They're doing stuff with people like Lady Gaga. That's their thing, but that's not our thing. We would much rather keep doing what we're doing and play with heavy-ass metal bands. That's our thing and we're proud of that. I'm happy with where we're at. Good for those bands. It's the path they chose, but we chose a different path."

On what he did during HIRAX's hiatus from during the late '80s and portions of the 90s:

Katon: "I took time off, but I was still in the music business. I wasn't playing in the band. When we started out, we didn't know anything about the business. People don't realize there's a business involved besides practicing and all of that and writing music. I worked at some record labels, I worked in record stores and I learned a lot about distribution of records. That helped out because I always wanted to still be hands-on and involved in all the music. I wanted to do distribution ourselves so that way, the record would get out to fans at a better price. When there's a middleman, they tack on money. We're still way involved, even though we sell way more records now than we used to. We have to keep on all the distribution and who deal with and what record labels we're working with. I like our DIY ethic. Do it yourself. [HIRAX's own] Black Devil Records, that's helped. We've been able to work with whoever we want. There's really no restrictions with what we do and I'm proud of that. Even this tour, we did it without any record label support. This is all done by us. We're very, very true to the roots that we came up on. So, yeah, I took 13 years off, learned a lot about the business end of it and when I met my wife, who was my girlfriend at the time, she thought I was crazy because I wasn't doing music. She pushed me and said I should start HIRAX again and she was actually right. I didn't really want to do it, but she kind of nudged me and once we started playing shows and I saw the fans again, that's really what matters to me is meeting the fans."

On the differences between European and American fans:

Katon: "The trends always, especially in the United States, it's a lot different in Europe from what I've learned from coming here, people, they have a good memory. In the United States, it's kind of a short-term memory where they'll like grunge one minute or they'll like hard rock or punk rock, which is fine, but in Europe, they've stuck with metal for many decades, so that's why it's great, even in South America, when we tour there, it's unbelievable. They're crazy fans down in South America. We tend to go where our scene is at. We don't really try to… we're not trying to be something big, fancy and commercial. We're trying to be a real metal band. That's all we believe in. We haven't stopped. Even when I took time off, I still listened to this kind of music, but now it means even more to me because it's so many years later and seeing the fans come to our shows with their kids. Now, we got two, three different generations coming to our shows. Their dads and moms played HIRAX records and their kids are into it."