HINDER fans recently got a preview of images from the book at the band's exclusive Las Vegas album party at the Hugh Hefner Sky Villa located in the Fantasy Tower at Palms Casino and Resort.

Devil's Due Publishing has long been known for its licensed books, including holding the rights for the "Halloween" and "Chucky" franchises. In recent years, DDP has made a name by developing original comic crossovers and series built around existing stars. Most notably DDP developed, produced and published "Heroes" star Milo Ventimiglia's "Rest", which fans first got a look at in San Diego at this year's Comic-Con.

"Growing up every kid dreams about being in a comic book, or being a superhero, we have a new and exciting opportunity to be portrayed in a comic book series of our own," said HINDER frontman Austin Winkler. "We are going to have a blast with this, it will be a lot of fun, this is for our fans, and they will be heavily involved in this, we think they will love it. All in the name of rock n roll!" 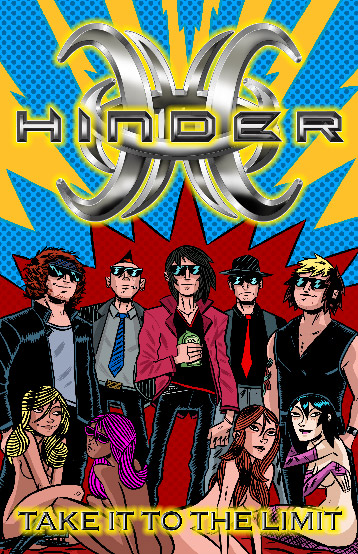