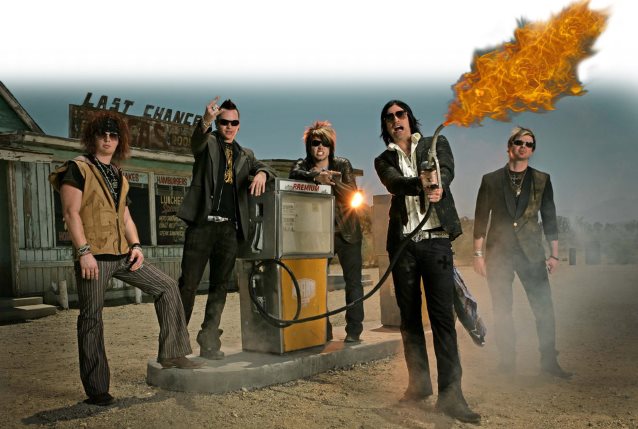 According to The Oklahoman, former HINDER lead singer Austin John Winkler has been sued by the current members of the band for allegedly unlawfully using the group trademark to promote his solo career after leaving HINDER in 2013.

The lawsuit filed Friday in federal court in Oklahoma City alleges Winkler's agreement with his former bandmates allows him to promote himself as "Austin Winkler, formerly of HINDER." The agreement also states if Winkler utilizes the HINDER name in promotional materials, the band name can't be larger or more prominent than his individual name.

The current HINDER members claim Winkler's promotional materials related to his 2016 and 2017 solo show the HINDER name in larger print than Winkler's name.

HINDER's attorney, Blake Johnson, told The Oklahoman that the musicians have "no ill will toward Mr. Winkler and would have much preferred to privately resolve this matter. Mr. Winkler, however, was apparently uninterested in such a solution. Though they've now been forced to seek legal redress, the band is less interested in a monetary reward and more interested in protecting HINDER's valuable intellectual property and its brand and reputation.

"The members of HINDER simply cannot abide another musician making reckless use of the name and trademark they've worked for over a decade to make meaningful and distinct."

Winkler departed HINDER in 2013 after suffering medical and emotional problems, according to the lawsuit. Upon leaving the band, Winkler and the remaining HINDER members executed a Leaving Member Agreement, "acknowledging that he has no rights in the (trademark), or to promotional use of the name HINDER, and accepting a very limited license for use of the mark under certain express restrictions," according to the lawsuit. Winkler is violating the agreement and infringing on the trademark "by falsely suggesting Winkler's continued affiliation with or endorsement by HINDER in ways likely to cause consumer confusion," the lawsuit alleges.

HINDER has reportedly sold nearly four million albums and more than seven and a half million singles, garnered north of a hundred and thirty million video views, and racked in fifty million spins on Spotify.

The band's debut album, 2005's "Extreme Behavior", climbed to No. 1 on Billboard's Top Heatseekers chart and made its way to No. 6 on The Billboard 200 chart. The album featured one of the biggest songs of the year, "Lips Of An Angel" — a Top 5 hit across eight Billboard singles charts (including No. 1 on Top 40).

HINDER's sophomore effort, "Take It To The Limit", surpassed their debut, peaking at No. 4 on The Billboard 200.