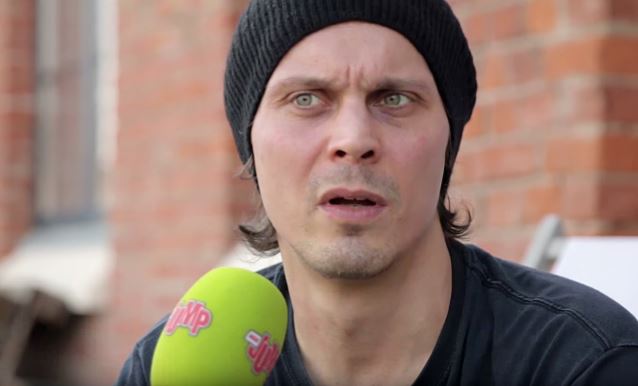 MDR Jump conducted an interview with vocalist Ville Valo of Finnish "love" metallers HIM before the band's August 4 concert in Leipzig, Germany. You can now watch the chat below.

Asked when fans can expect to see HIM's follow-up to 2013's "Tears On Tape" album, Ville said: "Hopefully it's gonna happen sometime next year. It's an interesting time for us, since our previous drummer [Mika Kristian Karppinen, a.k.a. Gas Lipstick] left the band in February. So now we have a new guy [Jukka 'Kosmo' Kröger, formerly of HERRA YLPPÖ & IHMISET], and that's also one of the reasons why we're not playing more gigs here in Germany. We're just doing a few shows to, kind of, like, test the waters, see how the chemistry works within the band with a new guy. And everything is going splendid, which is great, because [replacing a longtime drummer is] not the easiest thing. We had the same drummer for fifteen years, and then, all of a sudden, now we have to find somebody who would actually fill that hole, so to speak. But he's doing a great job. So, hopefully, yeah, we go back home in about a week, and then start, little by little, working on the new stuff — which would mean that, if we're lucky, it would be out in a year. So, Christmas next year, I'd say."

Kröger made his live debut with HIM on July 25 during a surprise performance at the Qstock festival in Oulu, Finland. The concert was originally billed as a gig by RAMBO RIMBAUD, the solo project of Ville Valo.

"Tears On Tape" sold 20,000 copies in the United States in its first week of release to debut at position No. 15 on The Billboard 200 chart.