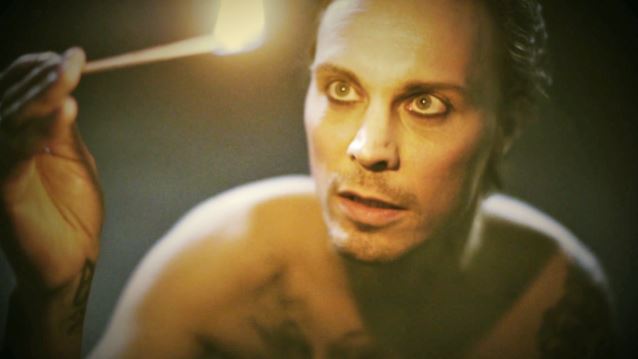 British guitarist Mark Gemini Thwaite, MGT for short, has signed with Hanover record imprint SPV and is scheduled to release his first solo album, "Volumes", at the end of June. The lead single, "Knowing Me Knowing You", a cover version of the ABBA classic featuring guest vocalist Ville Valo of HIM, will be available from April 15, mixed by Tim Palmer and mastered by Maor Appelbaum.

The official video for "Knowing Me Knowing You" can be seen below.

Speaking about the cover, Mark Thwaite said: "The single sleeve and their video had a wintery feel to it, so when we decided to shoot a video for our version, both myself and Ville Valo agreed we should try and capture some of the feel of the ABBA version and have a winter vibe to our video as well.

"We shot my footage up in the snow covered mountains and Ville's close-ups in front of a fire place that is secret place in Helsinki. We're pleased with it and director Ville Jurrikkala did a fantastic job!"

Mark Gemini Thwaite: "Having been a member of THE MISSION for many years, I have a longstanding relationship with Gero Herrde and SPV, a great independent label who have released several of our albums and live DVDs over the years. Now that I am finally releasing a solo album, I feel at home releasing the record through my friends at SPV!"

Silke Yli-Sirniö, management Tough Enough Promotion: "When Mark first sent me the tracks last autumn, I was immediately enchanted! No doubt that I wanted to be part of this project after being asked so kindly. A big THANK YOU actually goes to Ville Valo of HIM who first brought my attention to MGT. I am happy that at least some people are still making music like this in 2016 — and that people like Gero Herrde of SPV still believe in this kind of music!"

Gero Herrde, A&R at SPV: "Mark and I have known each other for many years; we never really lost sight of each other since our work with THE MISSION. With such a brilliant musician, it was only a question of time before he started working on his own solo album, recruiting the crème de la crème of independent rock vocalists for his project. Now the album is here at last and I'm proud to have the opportunity to release it on SPV!"