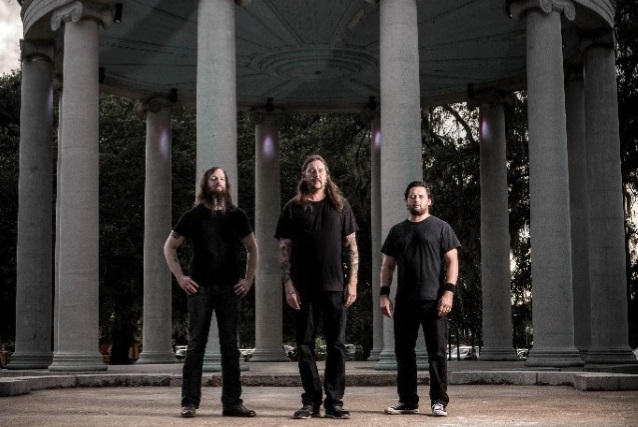 California heavy rockers HIGH ON FIRE have set "Electric Messiah" as the title of their eighth studio album, due in October via Entertainment One. The band has been busy in the studio since February putting the finishing touches on yet another blistering LP.

In a brand new interview with DCHeavyMetal.com, HIGH ON FIRE frontman Matt Pike called "Electric Messiah" "the best album we've ever done, by far. It's ridiculous. And I'm really proud of that," he said (hear audio below). "It is by far the best HIGH ON FIRE record ever, which is hard to believe, but it's fucking badass."

Asked how many songs will be on HIGH ON FIRE's new disc, Pike said: "I think there's 10 tracks, 11 tracks. It depends, 'cause there's a bunch of songs… Like, I wrote a Sumerian Anunnaki rock opera that actually is two songs, but they're separate tracks. And then there's a lot of 'slash' songs. There's a lot of songs that… you know [how certain bands] will have, like, one song but it makes, like, three songs, if you really think about it? It's kind of a bunch of shit like that, because we've had this constant stream of riffs and we put it together."

He continued: "I like, when I do HIGH ON FIRE records, to have a lot of interludes and weird shit going on, so you never lose focus, but it's constantly changing. It's a lot like… [2007's] 'Death Is This Communion' is like that; there's tracks that don't have names, but they're there. It's just one stream of HIGH ON FIRE consciousness, and it's fucking good; that's all. I'm really stoked on that record."

Pike also revealed that HIGH ON FIRE will promote "Electric Messiah" by embarking on a U.S. tour with MUNICIPAL WASTE. "We've been kind of beating a dead horse, dead in the water for a while, so we're doing a co-headline [run]," he explained. "The MUNICIPAL WASTE dudes are our good friends, so we figured we'll just punch the country together, swap spots and no one gets tired and all that stuff, and, yeah, it should be good. I wanna get HIGH ON FIRE rolling again, so it's full throttle. We took a lot of time to write this record, really make it good."

HIGH ON FIRE again teamed up with producer Kurt Ballou and GodCity Studios where the last two LPs were created. Additional tracking was done by Bryan Sours of Sour Sound.

"Electric Messiah" will serve as the highly anticipated follow-up to 2015's "Luminiferous", which garnered its own massive critical acclaim. NPR claimed that it "vividly captures HIGH ON FIRE's unique chemistry, presenting it in a tone that's both warm and aggressive to the point of leaping out at the listener."

The AV Club said the LP "aggressively illustrates that HIGH ON FIRE still deserves its place at the top of underground metal's food chain. It's hard to think of another band with this much-staying power."

HIGH ON FIRE has been confirmed for the 2018 Psycho Las Vegas festival, set to take place August 17-19 at the famed Hard Rock Hotel and Casino in Las Vegas, Nevada.

The original version of this article incorrectly stated that "Electric Messiah" would be released in September. A representative for HIGH ON FIRE's record label has confirmed to BLABBERMOUTH.NET that the album will arrive in October.