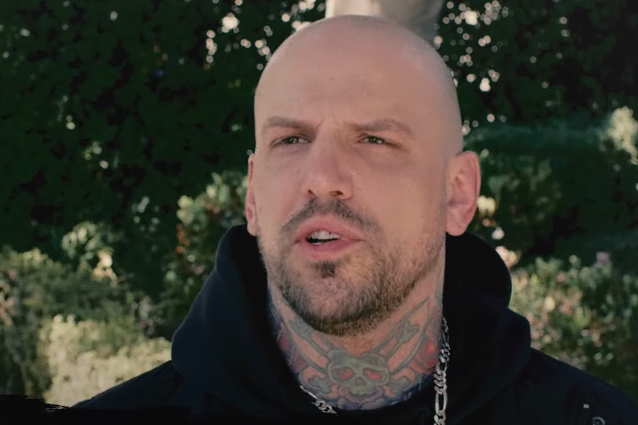 Last week, BAD WOLVES announced its new lead singer Daniel "DL" Laskiewicz and the title of its upcoming third album, "Dear Monsters". Today, the band followed up that news by dropping a new video on their social media, giving fans a behind-the-scenes look at the recording of the new LP in the studio. The footage shows all five band members — founding member and drummer John Boecklin, guitarist Doc Coyle, guitarist Chris Cain, bassist Kyle Konkiel and Laskiewicz — creating together and speaking with excitement about their next chapter.

"Dear Monsters" is expected to be released later this year via Better Noise Music.

BAD WOLVES are led by Boecklin, who has honored his commitment to the band's fans by continuing with the group when the previous singer, Tommy Vext, quit in January 2021.

BAD WOLVES broke the news of Laskiewicz's addition to the band via a statement on social media on June 2. The group wrote: "DL is a tremendous songwriter and singer, and we can confidently say that the album we are working on, titled 'Dear Monsters', is the best BAD WOLVES album to date.

"So much has happened since Tommy publicly quit BAD WOLVES a few months ago — and we disagree with the validity of much of what he has said publicly about our parting of ways — but we would prefer to not look back on the past and instead focus on this new chapter. And most importantly, we'd like to let the music speak for itself."

In recent months, Vext — who is black — has been vocal about his support for former U.S. president Donald Trump while insisting he had never experienced racism in America and that it was all "manufactured." In June 2020, Vext posted a six-plus-minute video on Instagram in which he suggested, without evidence, that "Black Lives Matter" was created by people like George Soros, the Holocaust survivor and billionaire who is the subject of many right-wing conspiracy theories, along with the Clinton Foundation. He also offered up the debunked theory that they invest in "Black Lives Matter" to profit from media coverage. The singer said he made the video "after weeks of research & interviews with independent journalist(s), military personnel, entertainment industry professionals, a virologist & many ex Democrats."

Coyle later took to his social media to "apologize to anyone who was hurt" by Tommy's comments and to offer up his perspective on what he called a "distraction" from BAD WOLVES' message of "inclusion and positivity."