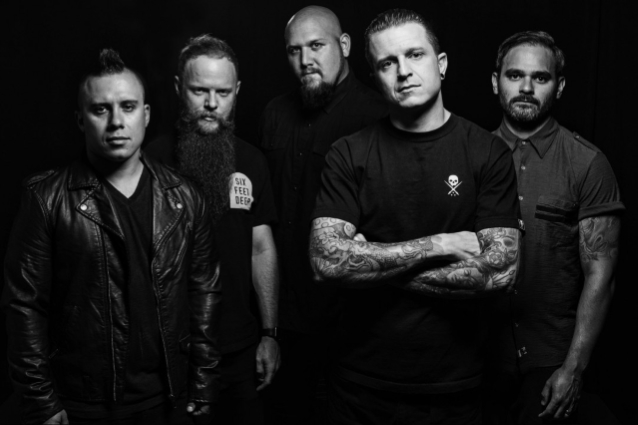 California metalcore band ATREYU appears to be teasing the announcement of a new single and album. The group's Twitter account has been updated with a short video clip which looks like it was shot at some sort of protest, although it is datestamped 08/24/18, implying that the official announcement will arrive this Friday, August 24.

Meanwhile, the Japanese Amazon store is offering an audio snippet of what appears to be ATREYU's new single, "In Our Wake". The song's chorus includes the line "Who will we leave in our wake?", which is featured in one of the signs in the above-mentioned video.

The full "In Our Wake" track is expected to be made available in two days.

Back in March, AVENGED SEVENFOLD singer M. Shadows said in Reddit chat that he had heard the new ATREYU LP and that it was "great," but he offered no further details.

During this past May's Rock On The Range festival in Columbus, Ohio, HardDrive Radio's Lou Brutus asked ATREYU frontman Alex Vakatzas to shed some more light on the group's follow-up to 2015's "Long Live".

"AVENGED SEVENFOLD, Matt specifically, has started this vicious rumor that we have a new record and it's gonna be good," Alex said. "And let me just tell you, first off, we don't have a new record and it's not gonna be good. So definitely don't wait till the fall of this year, because there'll be nothing for you to expect then." He then added that he was "contractually bound to give you these answers" and proceeded to wink at the camera.

After a three-year hiatus, ATREYU came back in 2014, performing at some of the largest hard rock and heavy metal festivals across the country, including Aftershock in Sacramento and Knotfest in San Bernardino.

"Long Live" was released in September 2015 through the Search And Destroy imprint as part of the joint venture between Raw Power Management and Spinefarm.