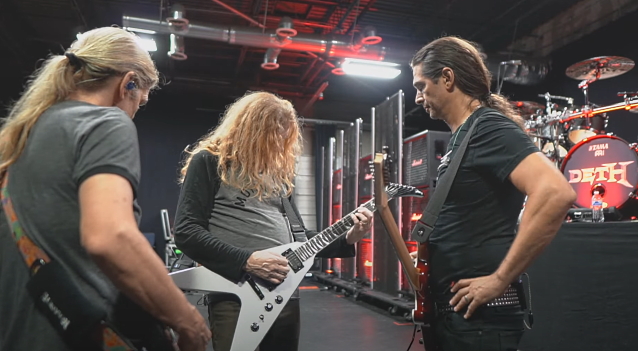 MEGADETH guitarist Kiko Loureiro has uploaded a new 24-minute behind-the-scenes video look at the rehearsals for the band's recently launched "The Metal Tour Of The Year".

Kiko wrote in a message accompanying the YouTube release of the clip: "Getting ready for 'The Metal Tour Of The Year' with LAMB OF GOD, TRIVIUM and HATEBREED. The entire MEGADETH team was ready and prepared to start rehearsals for the new tour after such a long time.

"In this video you'll see us rehearsing songs like 'Hangar 18', 'Symphony Of Destruction', 'Conquer Or Die', 'Holy Wars... The Punishment Due', 'In My Darkest Hour', 'Peace Sells', 'Poison Was The Cure', discussing about Vic Rattlehead and much more."

MEGADETH played its first show with bassist James LoMenzo in nearly 12 years on August 20 in Austin, Texas at the opening concert of "The Metal Tour Of The Year". Produced by Live Nation, the rescheduled trek will wrap in Quebec City, Quebec, Canada on Saturday, October 2.