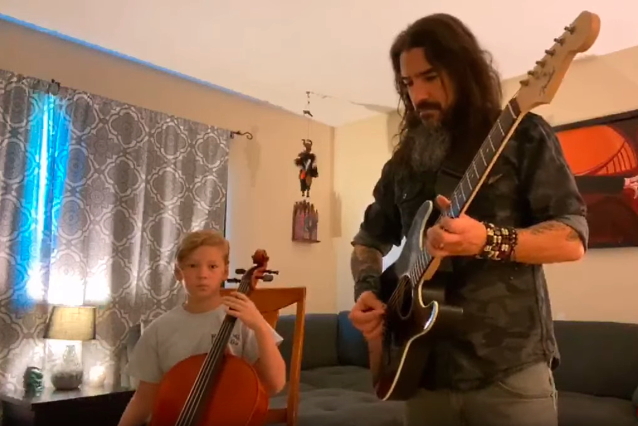 MACHINE HEAD frontman Robb Flynn performed an acoustic set yesterday (Friday, March 20). The first two songs of set — during which Robb was joined by his son Wyatt on a few tracks — were streamed on Facebook and YouTube for free, while the entire performance is available via Nugs.net, a platform designed to stream live performances.

Check out renditions of "Circle The Drain" and "Deafening Silence" below.

When he first announced the acoustic show earlier in the week, Robb said: "As some of you know, I had been booking an acoustic tour in Europe for June of this year. I was basically going to bring my family out and I was going to play a handful of acoustic dates right after our European tour ended, and the plan was to have my son Wyatt join me for a few songs. Well, that all fell apart…

"With movement here in the [San Francisco] Bay Area limited, not to mention the frustration of having our entire tour canceled, there's a lot of pent up musical energy that needs to be released.

"With my son outta school until at least September, he and I have been jamming and we came up with a pretty rad acoustic version of 'Circle The Drain' with him playing cello.

"Our partners at nugs.net suggested I do an acoustic performance on their site.

"This is a crazy time, our lives are all about to change dramatically. But we still have music."

Last month, MACHINE HEAD released "Circle The Drain" as a standalone single. It was the first new MACHINE HEAD song since "Do Or Die", which came out last October and was described by some fans and media outlets as a "diss" track aimed at MACHINE HEAD's detractors, in particular those who have been critical of the band's last album, 2018's "Catharsis".

MACHINE HEAD has spent the last few months celebrating the 25th-anniversary of the band's debut album, "Burn My Eyes", on tours of Europe and North America. Each show on the trek consisted of two parts: part one saw Flynn and bassist Jared MacEachern performing alongside new recruits, Polish guitarist Wacław "Vogg" Kiełtyka (DECAPITATED) and British drummer Matt Alston (DEVILMENT, EASTERN FRONT); while part two featured "Burn My Eyes" played in its entirety for the first time ever, with original drummer Chris Kontos and guitarist Logan Mader joining in.