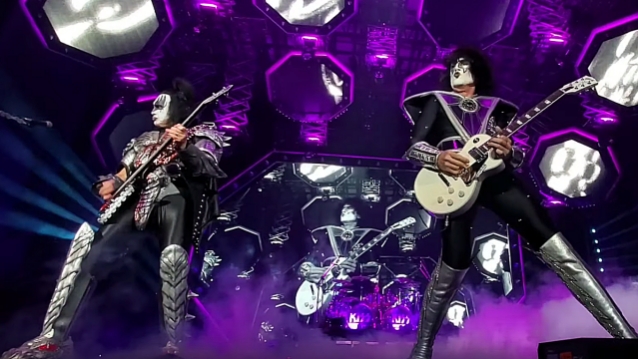 Although KISS canceled its Australian farewell tour after Stanley was diagnosed with a bad case of the flu, Gene Simmons, Eric Singer and Tommy Thayer still performed for sharks and eight fans separated from them by a small submarine.

After KISS and its fans traveled aboard separate boats off the coast of Port Lincoln in South Australia, the band stayed above board on one vessel, and the fans were lowered beneath the surface of the water from a second boat into the viewing sub in an area known for shark activity. Using underwater speakers, KISS's performance was audible to the submerged fans and the sharks.

Tour group Adventure Bay Charters uploaded a couple of photos to its Facebook page (see below) and wrote in an accompanying caption: "They came, we saw, we rocked — we partied all day with KISS!

"Thank you KISS and Airbnb for including us in this once in a lifetime concert that our team and guests will never forget."

The concert was a part of Airbnb's launch of "Animal Experiences" which aims to set a new standard for animal tourism.

KISS's music was used to attract great white sharks, which, according to research, have shown preferences towards heavy metal and rock and roll music.

When the concert was first announced, Stanley told Rolling Stone that he and his bandmates were intrigued at the suggestion.

"Airbnb approached us with this idea that sounded, quite frankly, a little weird, but we're used to being approached with things that are a little weird," he said. "I've played for a lot of land sharks. Now I finally get a chance to play for the ocean varieties."

KISS was forced to cancel the Australian leg of its "End Of The Road" world tour due to Stanley's ongoing illness.

Just days after rescheduling the start of the tour, KISS scrapped all of this month's shows and the rescheduled Perth concert on December 3.

KISS's shark concert this month marked only the fourth time the band has performed as a trio. KISS previously played as a three-piece in 1982 when original guitarist Ace Frehley reportedly refused to show up during a lip-synced performance of "I" from Studio 54, broadcast via satellite to the Sanremo Festival in Italy; in 2007 when a heart issue caused Stanley to be rushed to the hospital prior to KISS's concert at the Soboba Casino in San Jacinto, California; and in 2016, when Stanley missed a charity show after tearing a bicep.

Thank you KISS and Air BnB for including us in this...