Following the success of "Henry Rollins: Uncut from Israel", IFC (Independent Film Channel) presents a new special-event series that allow one of the most important voices in independent culture to truly tell it like it is. Henry takes his unique stage show on the road, presenting topical, hilarious and uncensored commentary in three of the most controversial locations on the planet. Henry's spoken word stage show is intertwined with compelling documentary footage shot on location.

IFC will air new episodes of Rollins' show every Friday in November (except November 28) that will feature Henry taking trips parts of the world currently in crisis — including New Orleans Northern Ireland, and South Africa. The premire dates are as follows:

Henry Rollins, the articulate and opinionated former lead singer of BLACK FLAG, frontman of the ROLLINS BAND, actor, author and spoken word artist, and host of "The Henry Rollins Show" on IFC, is known for his unique take on the current state of pop culture, politics and everything entertainment, for better or worse. Always outspoken, Rollins accepts dozens of speaking engagements each year, is known for bringing a raw energy to his talks and has won a Grammy Award for best spoken-word record. Rollins regularly tours with the USO, and has traveled to Afghanistan, Siberia, South Korea, Iraq, Kuwait, Honduras and Qatar to entertain and meet U.S. troops. 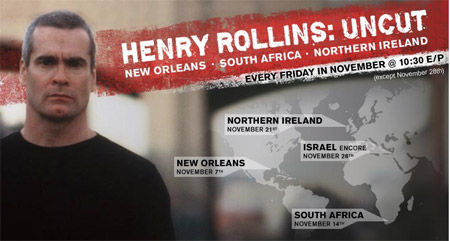