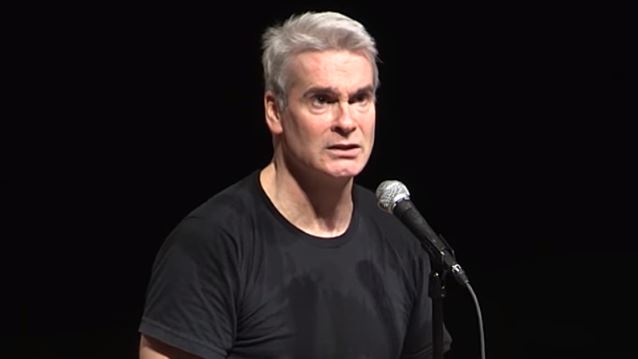 Punk rock icon Henry Rollins has penned a piece for Australia's Rolling Stone magazine in which he offered up his reaction to the stunning news that Donald Trump won the 2016 U.S. presidential election over Hillary Clinton.

Saying that "The sheer level of insanity that America has set out for itself has turned the country into a reality show the size of a nation," Rollins described Trump's victory as "a heads-up to the entire world that all the things that you might find objectionable about the USA, from the hegemonic overreach to the 24-7 bellicose posturing, will be not only more pronounced, but possibly the most visible aspects of not only the country's foreign policy but its domestic one as well."

He added: "What happened over a period of several months, ending in a gripping few hours, will change the course of American history, and might have enough momentum to affect world events. Not only is Trump a danger, his Vice President, Mike Pence, is an extraordinary dipshit."

Rollins also issued a warning to Australians to stay away from America, saying "it is not the place it claims to be." He then added ominously: "What happened to America can happen to any country. It is of the utmost importance to not only vote whenever possible, but to inform yourself as best you can and hold any and all elected officials to the highest possible scrutiny.

"America just tied a rock around its neck and threw itself into a river. Do not follow."

Back in August, Rollins spoke to the New Zealand TV show "Waatea 5th Estate" about what America might look like under President Donald Trump. He said: "I think you would have a country that would have an increasingly difficult time trying to get along with the European Union, such as it is, getting along with China, because we would become confrontational. [That's] not the way to deal with China, in my opinion. They play a longer game, their economy is run differently. They use sometimes confusion logic; there's some great writing about it. If Trump says, 'My way or the highway,' the Chinese will go, 'Okay, we're gonna collect on all that debt. And so we'll take that hotel and that whole skyline, that's ours today.'"

He continued: "I don't wanna get into any tough-guy chest puffing with any country; there's too many kids to get hurt and my country's economy can't sustain it. So if he wants to run a country like a failed businessman or like a corny reality show, I'm not in. And so under a Trump presidency, I think you'd have brown people, black people, Muslim people, gay people having potentially a dangerous or a very awful time in America."