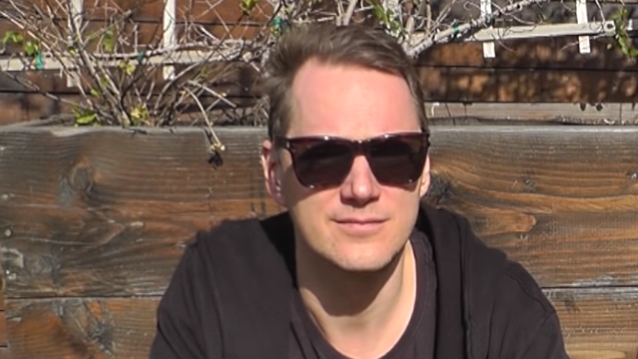 Kati Rausch of Music Interview Corner conducted an interview with bassist Henkka T. Blacksmith of Finnish metallers CHILDREN OF BODOM prior to the band's April 2 concert at The Observatory in Santa Ana, California. You can watch the entire chat below. A few excerpts follow (transcribed by BLABBERMOUTH.NET).

On the recording process for their latest studio album, "Hexed":

Henkka: "Basically, it was pretty normal procedure, like we always do. We recorded it in our own place. Last spring, we started recording, last March, so one year ago. Pretty much the only thing different was that when we started making the songs, we got an offer to do an American tour, so we had a few songs ready, then we went on tour for two months, then we came back to writing, so that was weird."

On whether the band's American tour influenced the writing of "Hexed":

Henkka: "I'm pretty sure because when you come back after two months, then you kind of like saw the songs differently, what you have written, so you make little changes to them. It was kind of a refreshing thing to do."

On the album cover concept for "Hexed", which Blacksmith was responsible for:

Henkka: "Yeah, in a way, I usually have ideas, then I tell the guys what could be cool and 'what do you guys think about this and that?' Actually, a few years ago, I already tried to convince the guys to make a traditional, painted artwork and this time, the guys said, 'Yeah, we're up for it.' Then I found this artist called Denis Forkas. We asked him if he could do it and he said 'yes.' Then we told him it needed to be purple and we needed a reaper on it. We had no other information for him, so he had to pull it from scratch. It was interesting. You only see the first, very raw [cover], then a draft, then you okay it, then you wait for half a year, then you have it ready. Normally you do it with a computer, like digital, then you can modify it all the time. With this, it was very different. It turned out really cool. It was worth taking the risk. It's a real painting. We got the scans of the painted artwork, then cropped it a little bit and put a little bit of filter on it."

On why CHILDREN OF BODOM has featured a reaper on all of its album covers:

Henkka: "Actually, it was by chance. When we did the first album, 'Something Wild' back in '97, we didn't have a cover for it, so we went to this Finnish photo archives and just started to browse photos that we could buy. Then, we had narrowed it to two different photos. The other one was blue, kids' bedroom, in a dreamy way, there was a small guy, in a way, spooky. The other one was this red with the reaper in the desert. Then we chose the red one, then there was the reaper. Ever since, we wanted to keep him."

On whether the new song "The Road" is an accurate description of CHILDREN OF BODOM's touring life:

Henkka: "I think it's from Alexi's [Laiho, guitar/vocals] perspective, because he wrote it. But probably, it could be, yeah, maybe if it was [written] in a nutshell and a little bit exaggerated and the harder things of the tour life."

On comparing American audiences to European:

Henkka: "Everywhere is different. Also, within the States, there's big differences from Orange County versus western Texas people, who are very different people. Or, Michigan people are very different from Florida. Yeah, it's very regional, but basic things are the same. Metal fans are crazy, especially on this tour, it's been really crazy and rowdy crowds, which is really good, so I have to thank everybody who has been there."