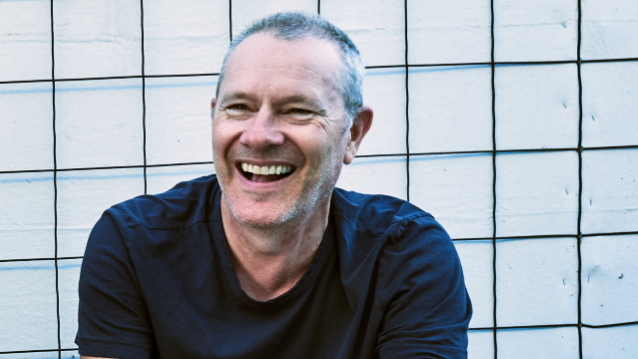 HELMET's Page Hamilton has reflected on the passing of Eddie Van Halen, saying VAN HALEN's music was unlike anything he had ever heard before.

Hamilton discussed his appreciation for the innovative VAN HALEN axeman, who died from cancer on October 6 at age 65, during an interview with the "Thunder Underground" podcast.

He said (hear audio below): "'Ain't Talkin' 'Bout Love', the groove on that, it's like this fucking old-time rock and roll meets modern something, and it stands the test of time.

"It's so funny. When we were working with [producer] Steve Albini over in Chicago, at Chicago Recording Company, where we recorded the demo of [HELMET's] 'In The Meantime', which became the master on the album, 'cause I always thought the demo was better than what we did in New York at the studio… Anyway, we were staying at Steve's, and we were driving to the studio, and I said something about [VAN HALEN's] 'Panama', and Albini goes, 'I don't like bad music.' And I was just, like, 'Excuse me? What?' This kind of attitude of our 'indie world' [of] Touch And Go, AmRep, SST, Homestead, whatever, that because something had some kind of cock-rock attitude to it that it wasn't cool, 'cause David Lee Roth wore fringe pants. I don't know what people's thinking was.

"I always based my love or not love of music on the music," he continued. "I'm a jazz nerd, and I didn't know what they looked like on stage. I drop the needle, I listen to it, and I go 'yay' or 'nay.' As Duke Ellington said, there are two kinds of music — good and bad.

"The first time I heard [VAN HALEN], it was the same thing as AC/DC, where my jaw dropped. It just had this sound — everything; the way the whole thing was put together; bass, drums, guitar, vocals — that was just completely different from anything that I'd ever heard before. And I realized right then and there, I'll never be able to do that.

"It wasn't one of my musical goals to play like Eddie — I have a different thing that's my vocabulary — but I just said, 'Even if I tried for a year and worked at it, I would just never be able to do that,'" Page added. "It's so incredibly fluid — it's like water flowing over moss-covered stones in a river. It's beyond the guitar. It's music that it takes you to this place. You're in a song, and here's this cool groove or whatever, and all of a sudden, this guitar comes in, and it's just like… I would describe it as a pterodactyl, like a prehistoric beast or some kind of a flock of birds or something. Like, what is that? It's not just a guitar. 'Cause it's a magical fucking amazing thing. And I would never disparage something like that because I didn't understand it.

"A friend of mine had sent me 'Hot For Teacher' that night, when [Eddie] passed, and I hadn't seen the video in about a million years. It's maybe the greatest MTV music video ever made. It's such a fucking sick fucking song. I mean, the drum parts, the whole thing — the lyrics. That's something else, man.