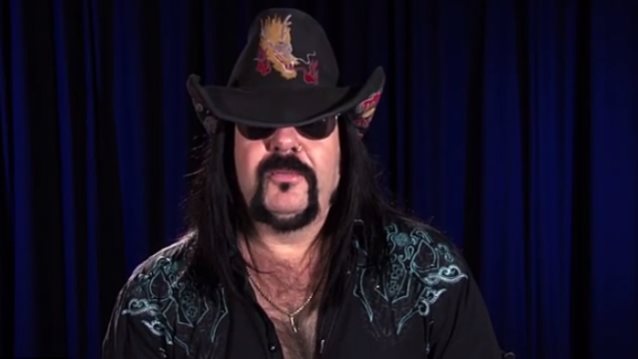 Mick Birchall of Manchester Rocks recently conducted an interview with former PANTERA and current HELLYEAH drummer Vinnie Paul Abbott. A couple of excerpts from the chat follow below.

Manchester Rocks: Would you say there any noticeable difference between the American hard rock/metal scene and the British, from your perspective?

Vinnie: Back in the day, there really wasn't much of a difference. However, these days, Europe and the U.K. still lives it, loves it and breathes it. You know, it's a part of their culture and their lifestyle. If you dig metal, you can still have that faith and belief in it in Europe, and the metal bands will always have a place to play here, because the people will never forget. Whereas in the U.S., it's very much "here today and gone tomorrow." Here today, gone this afternoon. It's just so driven by the people trying to get that one song they want off the Internet, instead of buying a record and following a band. So the fans in the U.S. still "get it," but I don't think they touch what goes on over here in Europe and the UK.

Vinnie: It's been getting a decent response. We've had some great reviews and acclaim, even from the critics who would usually have it in for you as a band. That was a great start, and then we did a tour all over the U.S. with AVENGED SEVENFOLD, and it went down great with their fans. We're now here in Europe and we're playing almost the whole record — I think, like, seven songs — and it's been going down great every night. Also, a lot of bands, when they come out with a new record, they only want to play one or two new songs and only want to focus on their past, with their hit singles. However, with this album and with this version of the band, we've wanted to focus on the new stuff. I mean, we'll still play songs off the previous records, but this album has been our favorite to play.

Manchester Rocks: I've noticed that "Blood For Blood" is a lot more darker and heavier than your previous records. What was the mindset going into this album? As I realize that two members (bassist Bob "Zilla" Kakaha and guitarist Greg Tribbett) have left.

Vinnie: Well, they didn't leave; we asked them to leave, so let's get that straight. [Laughs] Well, the bottom line is, we made those party records and we got that out of our system with the first couple of records. Then, with "Band Of Brothers", we got back to being a heavy metal band. We just wanted to play what was inside us and the experimentation phase was gone. So when we came to "Blood For Blood", the focus was on just making a heavy record; we didn't want there to be any boundaries on it and just be ourselves and that's what we did with this album.

Manchester Rocks: You've been with HELLYEAH since 2006 and had four albums now. What do you feel is the one thing you've learned with this band?

Vinnie: That with each record we get stronger, better and become more focused as a band. It was really scattered when we started. Some songs were southern rock, some songs were almost country, some were straight-up rock and roll and some were heavy metal. It felt good to do that after being in PANTERA, which was just heavy metal. However, as it's grown, it's gotten better and become more focused and it really is a brotherhood, even though we've had the two member changes, and I look forward to whatever comes next.