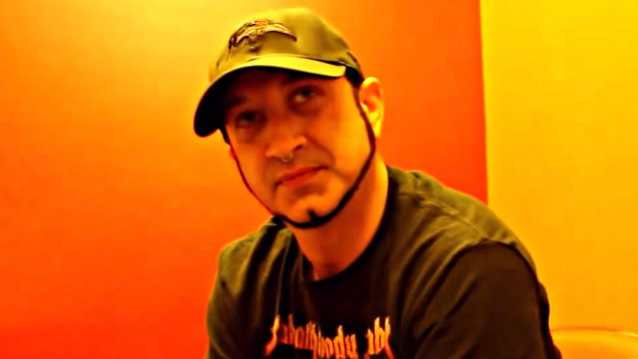 HELLYEAH guitarist Tom Maxwell believes that a lot of the newer hard rock bands lack their own style and write songs that are "unfocused" and lack "passion," in turn contributing to music fans' diminishing interest in buying full-length albums.

Speaking to Matt McCreary of KJAG Radio in Wichita, Kansas this past October, Maxwell said about the state of the current rock scene: "I think that bands need to dig deep and they need to reinvent themselves and they really need to do some soul searching musically and make records that [are strong] from song one to the last song… not just [have] a couple of [killer] tracks and the rest of it is shit. 'Cause that's why people don't buy records, man. They go on to iTunes and they're, like, 'Well, I only like this song,' or, 'I only like that song,' and the rest of the record, it can fuck itself. It's, like, they don't care [that] it's a body of work."

He continued: "I think most bands… I listen to these radio stations today and I'm hearing bands that I can't even… I can't differentiate who they are. I thought one band I heard the other day was SEVENDUST, and it wasn't SEVENDUST, but it was their formula, it was their style, it was their everything. There's a thousand NICKELBACK bands, there's a new SLIPKNOT band showing up every once in a while. And it's just, like, there's no… It's just shit. It's just unfocused, and [there's] no passion."

Tom added: "Most of these new bands are writing for that single. They wanna chart. They wanna get on whatever radio station, or try to, and let me tell you something, man. There's a lot of competition out there, and unless you have something that really speaks volumes and can separate you from the rest of the pack, you're just gonna fall into the rest of that 'follow the sheep' [group of bands]."