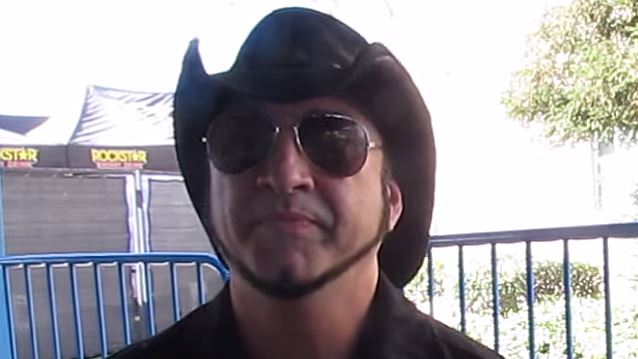 Jay Nanda of San Antonio Metal Music Examiner conducted an interview with HELLYEAH guitarist Tom Maxwell at this year's Knotfest on October 26 in Devore, California. You can now watch the chat below.

Asked to recount his favorite story involving late PANTERA guitarist "Dimebag" Darrell Abbott, Maxwell said: "I've got a very unique story about Dime. I was fortunate enough… My old band NOTHINGFACE, we were very fortunate enough to be able to tour with PANTERA; they took us out on the 'Reinventing The Steel' tour. And it was a long one, man; it was a couple of months long. And we really got to know… Obviously, I got to know [former PANTERA and current HELLYEAH drummer] Vinnie [Paul Abbott], the whole PANTERA crew and Dime as well. There was this one day where Dime came on my bus and he was with [PANTERA videographer] Bobby Tongs and he was with [drum tech] [John] Kat [Brooks], and they brought in some Guinness and some Jameson, or something, and they were showing me how to do the Irish Car Bomb, which I had never done before. So I'm, like, fucking petrified out of my mind. So I took a shot and another big shot, and I had to down it all at once. But anyway, we did that, and it was great. And he [Dimebag] saw my Les Paul — I have an old '68 Les Paul — he saw it sitting in the back of the bus. And he just went back there and he started picking it up and jamming on it. And I had another guitar of mine back there too, and I just went back there and we were just hanging out. And we were just conversating and we were just playing and he was just really feeling the guitar. And I asked him if he could show me the riff to 'By Demons Be Driven' off [PANTERA's] 'Vulgar Display Of Power' record — that fucking verse riff; just the sickest fucking swagger riff there is. And, man, he sat there with me for about 20 minutes, showing me the riff and jamming together, man. He showed me a lot of little, tiny tricks that he does — these little crazy… 'Cause a lot of times when you listen to PANTERA, you'll hear things that you actually are not thinking that you are hearing — these ghost bends, which are, like, notes that you start out holding the note down back into it, which is totally him; it's something that he mastered. That was my fucking experience — a one-on-one lesson with him, and it was learning one of his songs, his iconic riffs."