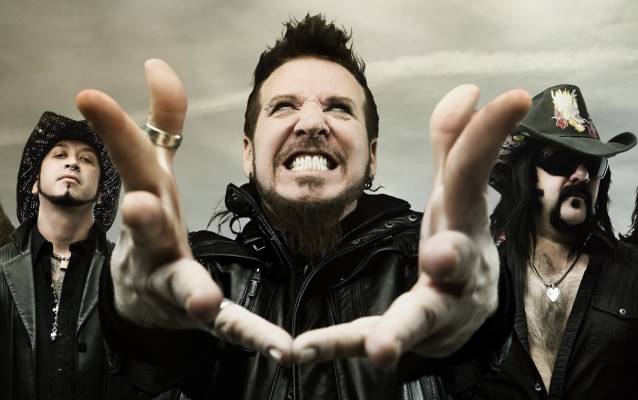 HELLYEAH has parted ways with guitarist Greg Tribbett (MUDVAYNE) and bassist Bob "Zilla" Kakaha (DAMAGEPLAN). A replacement bassist in the shape of Kyle Sanders (BLOODSIMPLE) has been secured.

In the comments section on Facebook, HELLYEAH stated about the split with Tribbett and Kakaha: "Things happen for necessary reasons.

"It's so easy for people to assume or makeup reasons for things.

"The reasons for this parting of ways was for the better good. When you hear the new record, you'll understand."

HELLYEAH's fourth studio album, "Blood For Blood", will be released on June 10 via Eleven Seven Music. The CD was helmed by producer Kevin Churko at his The Hideout Recording Studio in Las Vegas, Nevada. Churko is the Canadian musician, sound engineer, songwriter and record producer who has previously worked with OZZY OSBOURNE, FIVE FINGER DEATH PUNCH and IN THIS MOMENT, among other acts.

According to a press release, "Blood For Blood" is "a welcome return to form. It leaves a mark, thanks to songs like the angular, vengeful 'DMF', a song birthed by the sort of anger that can't be faked; it will leave you wondering who pissed these guys off. 'Gift' is dirty, rowdy rock with equal parts groove and swagger, but also possessed of the sort of punk rock energy that would make MOTÖRHEAD fans turns their heads. Then there is moodier, more contemplative fare like 'Moth' or 'Hush', which connect on an emotional, cellular level, proving that you can be incredibly heavy in ways other than loud and fast. The album sounds like a recharged HELLYEAH, taken up many notches."

The first single off "Blood For Blood", "Sangre Per Sangre (Blood For Blood)" will hit rock radio in April and will be available for sale, along with the metal radio track "Cross To Bier (Cradle of Bones)" on March 25 on all digital music platforms. The band will hit the road in the USA this spring.

In a recent interview, drummer Vinnie Paul Abbott (formerly of PANTERA and DAMAGEPLAN) stated about HELLYEAH's plans for the next CD: "Everything [Kevin has] ever done is great. I feel like he really made Ozzy sound fresh again, [on 2007's] 'Black Rain' especially. Sonically, [Kevin's] records are unbeatable, and he gets the best out of every band.

"We produced our last three albums ourselves, and we really feel like we did a good job on all that. But we feel it's time to have an outside ear, somebody to give us an extra opinion; to be the sixth member of the band, so to speak. That extra dude that drags everything out of you."

Vinnie also revealed that the new record's overall sound would "continue in the direction" of 2012's "Band Of Brothers", which represented the first time that the members of the band fully embraced their musical roots.

"The first two records were pretty experimental for us," Vinnie explained. "We really stepped outside of the box and did a lot of things that we couldn't do in PANTERA or MUDVAYNE or NOTHINGFACE; songs like 'Alcohaulin' Ass' just wouldn't fly in those bands. It was really liberating to be able to do that, and touch on some rock and roll, some blues, almost country southern rock, stuff like that. But with 'Band Of Brothers', we really wanted to get back to our roots and felt like it was time for all of us to bring the different things we brought to our previous bands into HELLYEAH, and not be afraid of it."

"Band Of Brothers" sold 19,000 copies in the United States in its first week of release to debut at position No. 19 on The Billboard 200 chart.