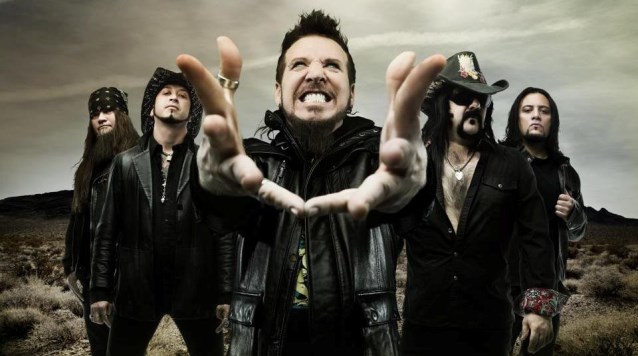 Fan-filmed video footage of HELLYEAH's August 8 performance at the Asylum in Portland, Maine as the support act for DEVICE can be seen below.

As previously reported, HELLYEAH has tapped producer Kevin Churko to helm the band's fourth studio album, tentatively due in early 2014. Churko is the Canadian musician, sound engineer, songwriter and record producer who has previously worked with OZZY OSBOURNE, FIVE FINGER DEATH PUNCH and IN THIS MOMENT, among other acts.

The recording sessions for the new HELLYEAH CD will take place this fall at Churko's The Hideout Recording Studio in Las Vegas, Nevada.

Speaking to the 93X radio station at this year's Rock Fest in Cadott, Wisconsin, Vinnie Paul stated about HELLYEAH's plans for the next CD: "We've done the past three HELLYEAH records [at my home studio in Dallas], but this [next] record, we really wanna go to another level with our music, and we're working with Kevin Churko, who's produced Ozzy and FIVE FINGER and IN THIS MOMENT and all that. We're actually recording that in Vegas right down the street from my house in Vegas, so it's almost gonna be as convenient as doing the Texas one."

He added: "We're already writing [material for the next album]. This tour [Gigantour] goes until August 20 and as soon as we're done, we go right into the studio with Kevin and we should have a record out probably early next year."

HELLYEAH took part in this year's edition of Gigantour, the critically acclaimed package festival founded in 2005 by MEGADETH mainman Dave Mustaine. Also appearing on the bill were headliners MEGADETH, along with BLACK LABEL SOCIETY, DEVICE, NEWSTED and DEATH DIVISION.

HELLYEAH's third album, "Band Of Brothers", sold 19,000 copies in the United States in its first week of release to debut at position No. 19 on The Billboard 200 chart.