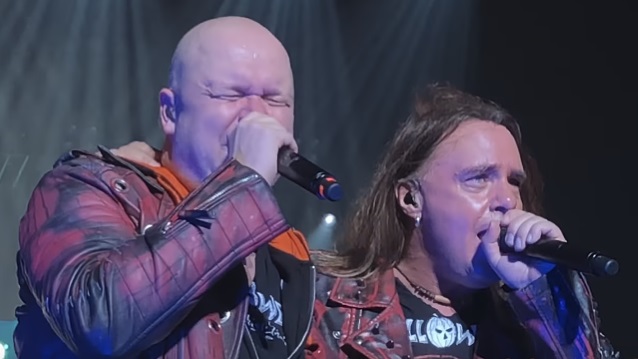 On the first leg of the "Pumpkins United" tour:

Andi: "It was quite a surprise, actually. To be honest, everybody thought about having not that much people in the concert halls. That was the fear from the beginning on, but since it's that many people, nobody recognized. I would say personally and I've spoken nearly every day with my guys, with my band fellows, I think, yeah, it seems like a dream because you just don't realize why and how many people that are actually appearing at the concerts. It was in Mexico City, we had like two shows of 12,000 in the concert hall. In Madrid, which was one of the last shows we did on the European leg, there were like 14,000 people in one of the concert halls. So, yeah, it's a dream come true."

On sharing the stage with Kiske, whom Deris originally replaced in 1994:

Andi: "First of all, he was visiting here for three weeks at the Canary Islands and I showed him around. We got very close. He's a person who I really, really like. He's a person you can talk with. He always has some interesting theme or subject to talk or discuss about. Even on tour, it's very important because it's never getting boring — you always have something to talk about. Being able to get to know that guy privately was very important because when we finally hit the stage, he was not a stranger to me anymore. I knew this could become a good friendship for the future and the next years, he will definitely be a part of my life, even in HELLOWEEN or not. I know sooner or later, he wants to buy a nice house over here in Tenerife Island, so he may become a neighbor. That's probably the reason…you don't need to act onstage. He's a good friend of mine, which I never expected, to be honest. Yeah, that's how life works. Suddenly, it shifts, whether you've been scared in the beginning. We had lots of talks. He was scared of me, I was scared of him. At the end of the day, it turned out that it fits, it fits very much."

On whether HELLOWEEN will possibly record an EP or full-length album with the "Pumpkins United" lineup:

Andi: "We certainly have lots and lots of talks. This summer, if the chemistry goes on like this, then everything is possible. After recording that particular 'Pumpkins United' song, we realized that it's easy working together. But then again, you know, when you meet musicians, I think musicians understand themselves without hassle, without problems. A musician is having a certain language and we are all musicians, so we get along nicely. Yeah, it was a great experience to finally finish a song together with Hansen. Sure, I'm used to writing songs with Weiki, but with Kai Hansen, it was the first time. Yeah, it was no problem at all, as if we would have worked together for decades already. So, I could see an upcoming album for the future. If the chemistry stays the way it is now, I definitely would say 99 percent yes, we're going for it."

On the last 20 years of HELLOWEEN:

Andi: "Strangely, I would say that there is not so much that has changed for our band. HELLOWEEN has always been there. Fortunately, we had a great comeback over here in Europe and Asia [in 1994]. We've made a great living, actually, and had no ups and downs like so many other bands, even my idols. You just mentioned JUDAS PRIEST for example, when the lead singer goes out of the band and the follow-up singer [Tim 'Ripper' Owens], for me, he was a great singer, but he did not have the personality to lead the band, so everybody was happy when Rob Halford went back. Me, I was happy when Rob went back. Same for IRON MAIDEN. There were so many bands. Everything seemed to break apart and everybody wants to try his own way and solo shit left and solo shit right. Nothing really works, not even with a big name like Bruce Dickinson. He didn't sell that much. When he went back to IRON MAIDEN, everything was glorious again. That's what the people expected and hoped for. I think it was mainly the '90s and parts of the next millennium, until 2005, 2006, when finally, everything reunited and everything went back to where it used to be and where it belonged, in my opinion. But we've never been influenced by that. We've been on that happy side to have that success, even with a new singer, myself. We were probably a big exception in the rock world. So, if you talk to me personally, for us, HELLOWEEN, nothing has changed that much. We always had fun. The good thing is the chemistry inside: Weiki, Markus, myself, Sascha and now Dani, the last 10, 12 years, it has been super-stable. Everybody likes each other very much. For us, there was never a question to change something. That's probably why we did not actually do a reunited HELLOWEEN without myself or without Sascha. We kept the band as it is and just brought the old rockers back to the band."