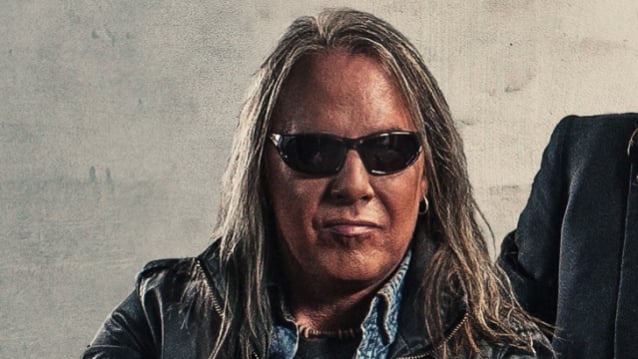 In a recent interview with the "Metal Magdalene With Jet" show on Metal Messiah Radio, frontman Andi Deris of German power metal legends HELLOWEEN reflected upon his joining of the band in 1994. Deris replaced Michael Kiske, who was unceremoniously dismissed from HELLOWEEN after the duel failures that were 1991's "Pink Bubbles Go Ape" and 1993's "Chameleon", two albums that saw HELLOWEEN drift away from its core power metal sound. Already a known quantity in European hard rock and metal circles through his work in German outfit PINK CREAM 69, Deris helped HELLOWEEN return to its metal roots on 1994's "Master Of The Rings", where the band has remained ever since. And while there were still factions of HELLOWEEN's fanbase who remained fiercely loyal to Kiske, Deris was largely accepted, resulting in a successful singer switch.

"I remember back in '94 when I joined HELLOWEEN, coming from an already successful band [PINK CREAM 69], it was the second debut album in my career, so to say," he said (hear audio below). "I remember the stomach aches, even when I talk about it, I feel it coming back because it was not clear at all: Will the people accept me as the new singer? And we all know the story. Changing singers is not a thing you should do. [Laughs] It's a very dangerous thing. I would only know a few bands like VAN HALEN, where it really happened to be great after the original singer and they had success going on. Who am I to wish for that? I only could hope. That's probably the main word, 'hope, hope, hope.' At the end of the day when we finally entered the studio in '94, it was more or less an attitude of 'What the fuck?' [Laughs] Just do your things and hope for the best, have fun, because making music is all about fun, isn't it? At the end of the day, you should not actually feel or fall into this money or future or whatever questions and getting paranoid. Being a musician, if you have enough strong nerves, you shouldn't do that, otherwise you would be always, always paranoid. You would be completely paranoid, so at the end of the day, you must be somebody who says 'Well, WTF, just go for it and hope for the best.'"

HELLOWEEN reunited with Kiske along with original vocalist/guitarist Kai Hansen in 2016 for the "Pumpkins United" world tour.

The "Pumpkins United" tour marked the first time Kiske had played live with HELLOWEEN since 1993. Hansen, who departed HELLOWEEN in 1988, has been joining the band onstage on various tours and festival appearances throughout the years. The set features several duets with Kiske and his replacement, Deris, along with many rarely played songs, including "Kids Of The Century", "Rise And Fall" and "Livin' Ain't No Crime". Hansen — who fronted HELLOWEEN until late 1986 — sings a medley of several early HELLOWEEN classics, including "Ride The Sky", "Judas", "Starlight" and "Heavy Metal (Is The Law)".

HELLOWEEN recently released the "United Alive" DVD/Blu-Ray that features over three hours of live material in stereo and premium 5.1 Surround Sound, plus backstage material, tons of surprises, and a very personal band interview about the past, present, and future. The live CD/vinyl presents a whopping two hours and 20 minutes of pure audio material from the concert in Madrid plus four bonus tracks from the shows in Prague, São Paulo, Wacken and Santiago de Chile.