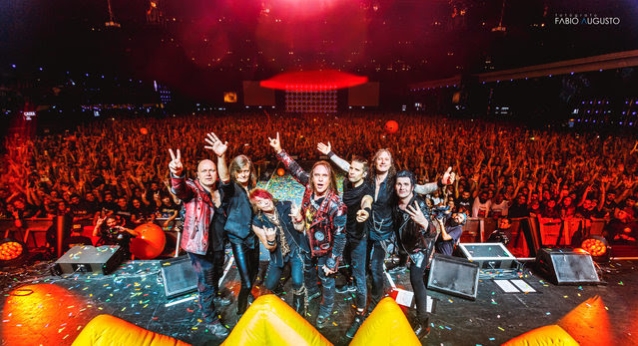 The reunited expanded classic lineup of German power metallers HELLOWEEN — featuring seven musicians, including former vocalist Michael Kiske and guitarist Kai Hansen alongside current singer Andi Deris and guitarist Sascha Gerstner — has captured "the very best moments" from its ongoing "Pumpkins United" world tour and will make the footage and recordings available as a live CD as well as on DVD and Blu-ray in early 2019. In addition, there will be a brand-new HELLOWEEN studio album featuring Kiske and Hansen. The band's songwriting trio of Michael Weikath, Hansen and Deris will retreat to the studio in 2019 to begin work on the disc, which is scheduled to arrive in 2020 via Nuclear Blast.

HELLOWEEN will tour North America in September, to be followed by additional dates in Latin America. The final "Pumpkins United" concert of 2018 will take place in Hamburg, right where all the madness started in 1984, at the legendary Sporthalle on December 22.

Asked by Spark TV whether HELLOWEEN will continue to compose new music with their reunited lineup, Hansen said: "Let's do this tour first, that's what we said. Of course, the ideas are there, for sure. But, now we want to focus on doing this. It will go until the end of next year on and off, but I think from the middle of next year we can be more definite about making an album. We'll see."

Added Weikath: "When we did this extra track for the tour, the 'Pumpkins United', it was out of schedule, because we were preparing for the tour. We were rehearsing. Usually we don't do track recordings during a rehearsal. You take your extra time for it. If we're ever going to record something together with everyone, it would certainly take more time than back when we were doing the 'Keeper [Of The Seven Keys]' records because there's more characters, more alpha animals involved. That's okay. It's going to work. It's going to take a lot longer. If we deliver something like that, we wouldn't want it to be half-baked in any way. There's not going to be a fucking filler track…"