U.K.-based blackened death metal group HECATE ENTHRONED will release "Embrace Of The Godless Aeon", its first album in five years (and its debut for new label M-Theory Audio), on January 25, 2019. The LP — which features cover artwork by Nestor Avalos (BLOODBATH, ROTTING CHRIST, THE BLACK DAHLIA MURDER) — can be pre-ordered now on CD and red splatter vinyl at this location. A limited-edition deluxe box set that includes exclusive purple vinyl and cassette editions of the album, a signed photo card and other collectibles is also available.

The official lyric video for a new song from the album, "Temples That Breathe", can be streamed below.

Says bassist Dylan Hughes: "This album with its epic sweeping orchestration and heavy aggression represents a new chapter for us cementing the chemistry of the current lineup and our partnership with M-Theory. A welcome return from Sarah Jezebel Deva hints to the grandiose flavor of earlier releases, but this time, it's tempered with a guitar and drum sound forged from solid steel and then edged by a razor-sharp production from Dan Abela. The summoning of unholy flame and terror that is the cover art is an oil painting commissioned from in-demand satanic artist Nestor Avalos and begins your visceral journey through cold bleak landscapes, crushing tormented seas and searing shards of heavy metal."

HECATE ENTHRONED's next live performance will take place on December 14 with Altar at De Verlichte Geest in Roeselare. The group plans to tour extensively throughout 2019. 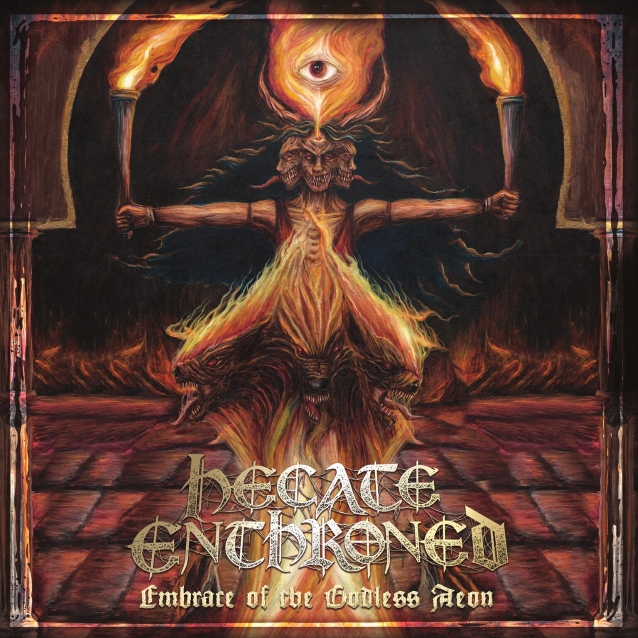