BLABBERMOUTH.NET is proud to be an official partner of the eighth edition of Heavy Montreal, the constantly evolving festival which is set to take place this weekend (August 6 and 7) at the Plaine des Jeux of Parc Jean-Drapeau in Montreal, Quebec, Canada. FIVE FINGER DEATH PUNCH, DISTURBED, NIGHTWISH and VOLBEAT are among the confirmed bands for this year's edition.

For the first time, Heavy Montreal will be home to the BLABBERMOUTH.NET stage that will host a dozen artists. In order of appearance, they are:

Jason Rockman, SLAVES ON DOPE singer and CHOM radio DJ, as well as the unofficial "ambassador" of Heavy Montreal, told BLABBERMOUTH.NET about the city that is hosting the event: "I don't know of anyone from out of town who comes to Montreal and has a bad time. It's such a beautiful city, and the festival is accessible from any hotel in the metro area. A lot of festivals will have people showing up from outside of the city and they have to drive there, so people are driving home drunk. But the nice thing about Heavy is that the majority of the people take the metro to get to the festival grounds. It's just great to see all of these people coming to have a good time and not worry about driving home because public transport is so accessible."

Regarding the festival grounds, Jason said: "The festival grounds are all on the other side of the island in Parc Jean Drapeau. This year, it's in Plaines des Jeux. What's nice about the site is the stages are mixed in with nature. It's put together in such a way that it's going to be a really cool experience for the people going to the festival. You can be walking around the festival grounds and see Montreal's skyline, which is simply amazing. People are going to leave the festival going, 'Wow, that was great. It was really a well-run festival!'"

On the topic of this year's lineup, Jason said: "What's cool about the two days is that they are compact. Heavy started off as a two-day festival so going back to that setup makes sense when you look at the lineup on both days. It's just one good band after another. They managed to put every aspect of heavy music on display. You start with FIVE FINGER DEATH PUNCH and DISTURBED, who are huge rock radio bands; they're massive. Having them as headliners is definitely going to bring a lot of people from south of the border up to Montreal. You have them, then you have FEAR FACTORY, MASTODON, SEBASTIAN BACH, VOLBEAT, NIGHTWISH, and so much more. We just added HATEBREED; same with SAINT ASONIA. And ALTER BRIDGE — Myles Kennedy is one of the best singers in rock. Then if you like black metal, there's INQUISITION. Something for everyone this year.

Asked what makes Heavy Montreal the No. 1 North American festival, Jason said: "It has to do with the folks at Evenko. The staff at Evenko go the extra mile to give the festivalgoer a once-in-a-lifetime experience. They take a page out of the playbook from the European festivals. It's not some sterile, boring festival. It's got this vibe where you feel that the festival is run by music fans. All of the people involved with the festival, they're big-time music fans and they care about it. They're not just a bunch of suits trying to think what will bring a lot of people in. They want to make it a experience the fans will love, and you can tell by the bands they put on the bill. They put a lot of thought into the lineup to give every heavy music fan something they will enjoy."

The Plaine des Jeux site — steps away from the Jean-Drapeau metro station on Île Sainte-Hélène — which can accommodate 25,000 people, is well known by festival goers, who have been visiting it for several years. By bringing together the Heavy Montreal shows on three stages installed in a clearing surrounded by mature trees, the organizers want to create an intimate atmosphere that will heighten the magic of the moment. Festivalgoers will be able to fully enjoy this exceptional site and make it their own; the Plaine des jeux being the ideal location to live the rock and metal experience to the fullest. 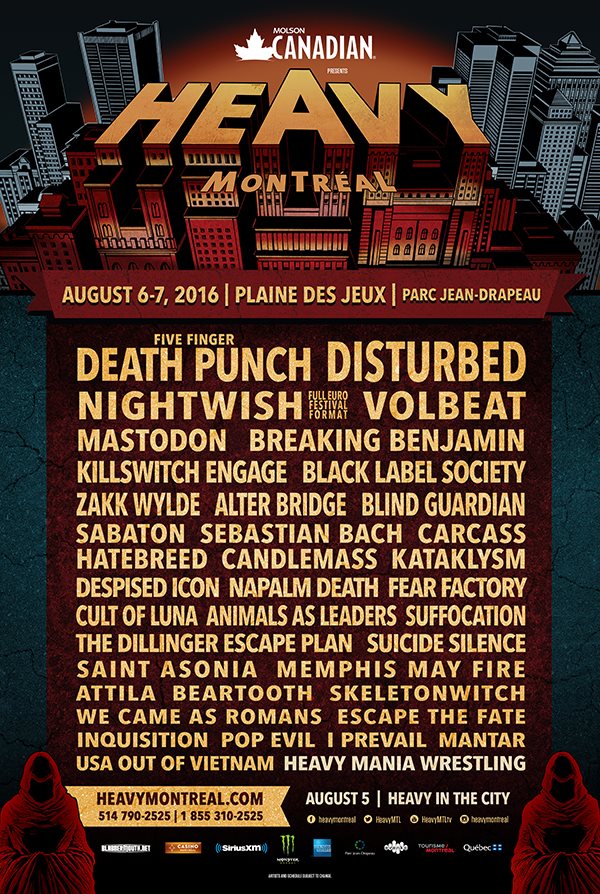