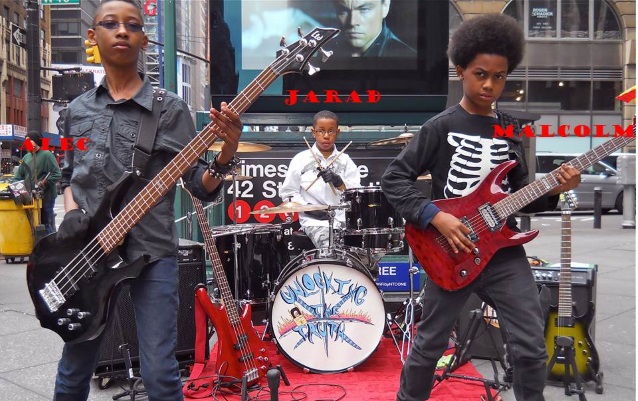 According to the New York Daily News, UNLOCKING THE TRUTH — the heavy metal band from Flatbush, Brooklyn made up of three African American boys, 13-year-old guitarist Malcolm Brickhouse, 13-year-old bassist Alec Atkins and 12-year-old drummer Jarad Dawkins — got permission from a New York judge on Tuesday (July 22) to sign a multi-album deal with Sony. The musicians needed the judge's approval because they are minors.

Supreme Court Justice Carol Edmead questioned the boys' parents to make sure that they understood the contract and had set up trust accounts for their children. She also told the boys to spend their money wisely. "No Porsches!" she said.

UNLOCKING THE TRUTH entered the studio on Wednesday to record its first single, "Monster", for The Cherry Group, a division of Sony.

As part of its guaranteed two-album deal with Sony, UNLOCKING THE TRUTH will receive $60,000 to record the first disc and possibly as much as $325,000 for the second CD. Sony has an option to release a total of five albums from UNLOCKING THE TRUTH that could push the label's financial investment to around $1.7 million ($325,000 for the second album, $400,000 for the third, $450,000 for the fourth and $550,000 for the fifth). It should be noted, however, that the band will only see the real money after an initial $60,000 advance if their debut album sells more than 250,000 copies, a prospect that seems highly unlikely in an age of diminishing record sales.

Commenting on news reports that UNLOCKING THE TRUTH landed a "$1.7 million-dollar deal with Sony," TRIVIUM bassist Paolo Gregoletto wrote on Facebook: "The young kids that were signed got a $60,000 recording budget for their first album and have to sell 250,000 copies to receive royalties. That isn't a 1.7 million-dollar recording deal. I hope that they got a good lawyer and someone looking out for them."

UNLOCKING THE TRUTH, which is now managed by "Welcome Back, Kotter" co-creator Alan Sacks, has already played the Coachella festival and has supported GUNS N' ROSES. In addition, the band has appeared in a national ad campaign for Verizon Wireless.

An UNLOCKING THE TRUTH book about the band's rise to success will be released by Penguin around Christmas, and a documentary about the group's experiences is also in the works.