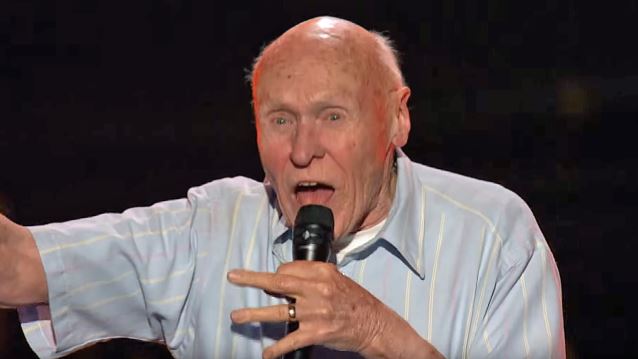 82-year-old John Hetlinger, who became a viral video sensation last month when he belted out the DROWNING POOL classic "Bodies" on "America's Got Talent", once again brought his screaming vocals to the show's stage on the July 20 episode of the popular NBC competition show. For his second audition, Hetlinger chose to perform ROB ZOMBIE's "Dragula", a decision that didn't go over well with some critics. CarterMatt.com write that "the problem with [Hetlinger's] audition this time is that he didn't have as catchy a song behind him. This literally just felt like an old man screaming." Meanwhile, Gossip & Gab said: "[John] seems like such a sweet, old guy and then sings some hardcore rock and it is just screaming and annoying." Judge Simon Cowell seemed to enjoy the performance, saying, "John, I have never seen or heard an act like you in all the years I've been doing this." Cowell went on to say, "I am going to fight for you to go into the finals."

Unfortunately, Simon's efforts were in vain as fellow judge Heidi Klum made sure Hetlinger did not advance to the next round.

After the retired aerospace engineer's "Bodies" performance went viral, leading to a plethora of tweets, millions of Facebook views and an invitation from DROWNING POOL to join them onstage, he told the Denver Post about his sudden popularity: "I'm taking it in stride. I'm really surprised by the results, but all in all, I think it's really a lot of fun."

Hetlinger explained that been going to karaoke bars in Albuquerque, where two of his kids live, for a while when the DJ at Spectators Sports Pub and Grill asked Hetlinger, about five years ago, to join him for a song. The two took on "Dragula", much to the delight of the bar's crowd.

Hetlinger, who was a Navy pilot, later a minister and then an aerospace engineer for Ball Aerospace in Boulder where he worked on a team that made repairs to the Hubble telescope, said that he was not bothered by any of the criticism of his performance.

"There are reviews in all the heavy metal magazines and all over the world, but they include statements like, 'Well, admittedly he doesn't sing very well,'" John said with a laugh.